"You can't un-see that" Watch a young Sam Burns show off his birdie dance!

A video has emerged of Sam Burns and Riley Davis showing off their "birdie dance" during the 2014 Junior Ryder Cup. 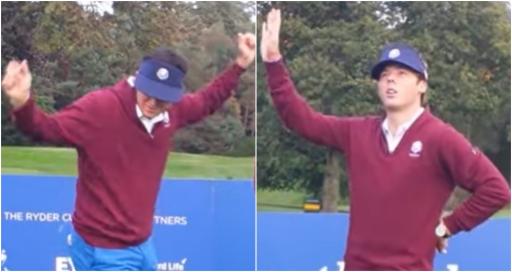 Sam Burns was already familiar with Davis Riley as they headed to a playoff at the Valspar Championship on the PGA Tour.

The pair had grown up playing junior golf together and Burns, 25, had previously described Riley's game as world class. Justin Thomas was also impressed.

But it was Burns who emerged victorious with a monstrous birdie putt. A short time later he spoke highly of Riley to the media.

One question was posed to Burns. Does he remember any epic battles between the pair as junior golfers? He was sure there was, but couldn't remember the specifics.

Although he did neglect to tell us about this. This, in all its glory, is absolutely sensational. It was picked up by Golf Channel in their broadcast.

The video shows baby-faced Burns alongside Riley and Brade Dalke as junior Ryder Cuppers in 2014 at Blairgowrie Golf Club in Scotland.

Announcer Anna Whiteley asked the panel what they thought, before adding her own opinion: "I feel like this is the kind of video that you sort of tape and it haunts you for the rest of your life."

Well, we're not sure what Burns will think about this now. He'll no doubt be asked about it in some point at the future.

Burns captured his third PGA Tour title in 12 months as he defended his title at Innisbrook Resort.

He drained a huge putt for birdie at the second playoff hole at the Copperhead Course and Riley couldn't match him.

Riley also had troubles earlier in the round when he carded a catastrophic triple bogey in a wild hole. Read about that here.

There is no doubt these two will be stars of the future. But should they stay away from the dance floor?!