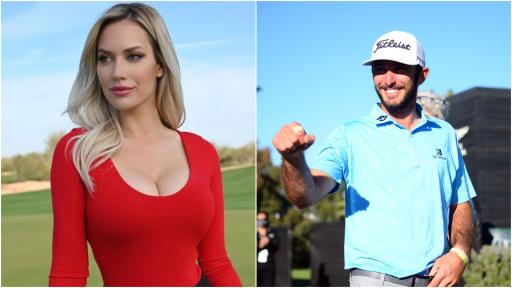 Paige Spiranac has leapt to the defence of Max Homa, after the recent PGA Tour winner received an onslaught of online abuse for not wearing red during the final round of the WGC-Workday Championship at The Concession.

Many of the world's best wore Woods' iconic black and red combination last Sunday to show support to the 15-time major champion and it caused a serious stir on social media.

Those who are sponsored by Nike were able to wear a 'Sunday Red' outfit with ease, whilst those sponsored by other brands weren't able to chuck a red shirt on so easily.

Homa, who was a huge fan of Woods growing up and still looks up to him today, took to Twitter to explain that he is contractually abliged to wear certain outfits with certain logos, hence why he wasn't able to take part in the tribute at such short notice.

For some reason not all golf fans could seem to grasp how contracts work and decided to target Homa, with many suggesting he could have just bought a red shirt from a local sports store.

Speaking on her podcast 'Playing A Round', Spiranac was keen to speak out about the incident and share her opinion on the Sunday Red tribute.

"It just kind of turned into this huge deal that almost took over what the whole meaning was and that was to show support to Tiger Woods and it was almost like if you didn’t wear red on Sunday then like f*ck you, you don’t care about Tiger. It was weird.

"The reaction that Max Homa got was so surprising. I don’t think people realise that when you are under contract with a clothing company you don’t have an option to wear something else. Not only was it just the shirt but it has all the logos too so he has like three or four logos put on his shirt and before every single tournament these guys have their clothes sent to them basically still in the wrappers and that’s what they’re going to wear.

"So yes it was really easy for all the Nike sponsored athletes to wear Tiger red because Tiger has only worn Nike and if you’re a Nike athlete you only have the swoosh, you don’t have any other patches or anything.

"The reaction that Max got was unbelievable, people were genuinely upset by him and him being the good guy that he is kept putting tweets out to try and explain where he’s coming from and it almost made it worse.

"People began to nitpick at everything he said and it really p*ssed me off because we constantly talk about how athletes need to show more personality and we want them to be more active on social media and you have someone like Max who is so genuinely nice and he cares so much about connecting with people on social media, he doesn’t have to do that, he doesn’t need it, he’s doing it because he likes to do it.

"It gives you guys an inside look so for them to turn on him and say that what he was doing wasn’t okay and he doesn’t care about Tiger and all of this stuff, sh*t like that makes good guys like Max not want to be on social media anymore.

"It was so stupid and it drives me insane because you know what’s going to happen next week is he’s probably going to have his agent tweet for him. Stupid people ruin good things."

NEXT PAGE: Collin Morikawa has made a CRAZY amount of money since turning pro on PGA Tour