PGA Tour pro Max Homa attempted a shot for the dreamers during Friday's opening round of the Zurich Classic. 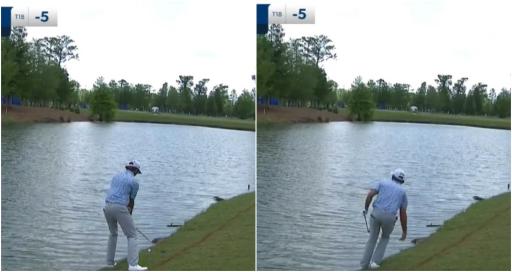 PGA Tour pro Max Homa was faced with an interesting shot during Thursday's opening round of the Zurich Classic.

As this is the only team event on the schedule, it means that at times players have to have each others' backs.

Homa, 31, is paired with Talor Gooch. He has given them the name Team Hooch. Their walk on music was "Shake Ya Tailfeather" by Diddy.

The lyrics in that song include: "We just do it for fun." Well, this shot Homa was facing was anything but.

His partner had hit the ball way right on the par-4, 504 yard sixth hole. Homa's was fortunate to stay dry. And his goal was to stay dry.

Still, if you take a look, you can see the green is way, way right of his target. He would have needed to hit an almighty slice to get there.

Shot tracer had no idea where it went. And we, too, are still none the wiser.

somehow Max Homa stayed out of the lake pic.twitter.com/6a5ptKF3qX

worth noting that the green was over here, this was a shot for the dreamers pic.twitter.com/jEBlMODu6K

(Disregard the fact that it went 120 yards left plz and thx) https://t.co/VwtNdOY73d

Lol no thx. Main goal was not to go swimming

What exactly would Homa have done if this was just a normal stroke play event? Drop? Hit it lefty?

Later, Homa did not want to reveal how the conversation went down with his caddie.

The main goal was just to not go swimming. Which Homa manages, just about. Still, full marks for effort.

Whether Homa found his golf ball we do not know. Gooch sent his second shot from the fairway bunker to the greenside bunker.

The team departed the hole with a bogey but Homa could have needed a change of clothes.

They did bounce back at the next hole and made an eagle, but found themselves some way off the lead after 18 holes.

Homa and Gooch signed for an opening 6-under at TPC Louisiana.