Patrick Cantlay: "I don't spend too much time trying to chase that"

Patrick Cantlay discussed his OWGR ahead of the Zurich Classic of New Orleans on the PGA Tour. 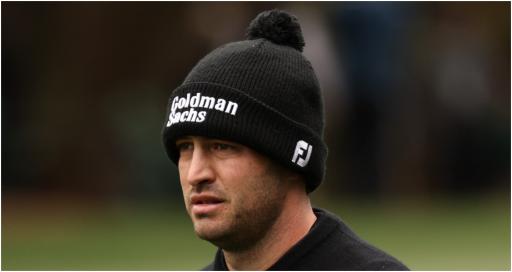 Patrick Cantlay says he doesn't pay too much attention to world rankings because he's too busy prepping for tournaments.

Cantlay is playing the Zurich Classic of New Orleans this week - the only full-field team event on the PGA Tour.

He is partnering Olympic gold medalist Xander Schauffele and both feel the fact they have "similar games" will bode well for them.

Both players are coming into the tournament off the back of frustrating peformances at the Masters.

Cantlay made the cut but fell out of contention over the weekend and had to settle for a finish of T-39.

Schauffele, on the other hand, missed the cut. It was an uncharacteristic showing from someone who always seems in the mix come Sunday.

Both players faced the media and joked that they wouldn't be out there "apologizing to each other" over errant shots.

There is a history between the two, in that they both starred in America's dismantling of Europe at the Ryder Cup last September.

Cantlay said: "You wouldn't want to spend a whole week with someone you didn't like.

"Being here with a really good friend makes it all that much better.

"Obviously we've played a lot of golf together and had some success in these type of formats before, so that can only be good vibes for a week like this."

A topic on hand was world rankings. Justin Thomas has previously been vocal about how his ranking has annoyed him. Brooks Koepka, too, has also been frustrated to slide down the rankings due to injuries and poor performances.

What does Cantlay make of his? The 30-year-old has never been the World No.1. The closest he came was in February when he was ranked as the third best player on the planet. Now only Jon Rahm, Collin Morikawa and Scottie Scheffler are ahead of him in the rankings.

Cantlay said: "I definitely know where I'm at in general on the World Rankings. I see it in various places. But I don't spend too much time trying to chase that.

"I feel like I spend all my time prepping for tournaments and trying to win tournaments, and if you win enough tournaments you'll find yourself in a much better position on that World Ranking list, and that's ultimately the way to climb the list is just to win events.

"I don't put too much time or effort into where I am on a particular day or week on the World Ranking, but I do do everything in my power to prep for tournament weeks."