PGA Tour professional Joel Dahmen played a beautiful shot from the sand at Sentry Tournament of Champions and was robbed of a birdie in cruel fashion. 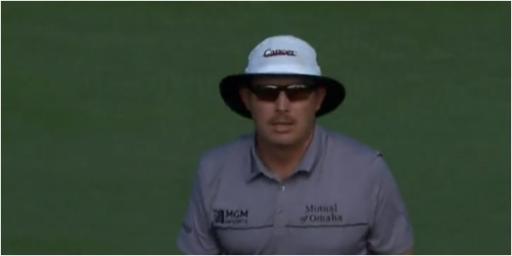 PGA Tour pro Joel Dahmen, who emotionally got his first win last year, had an unfortunate break over the weekend.

In Kapalua at the Sentry Tournament of Champions, Dahmen was faced with shot in a deep bunker that guards the green.

He made a solid connection and the ball rolls towards the hole but instead Dahmen, 34, gets an unfortunate break.

The ball hits the flag stick and you'd think under normal circumstances it would roll in.

I can’t comprehend the scores this week. Impressive stuff. #playbetter

That would have seen him get his score to 15-under par which was still some margin off the lead on a bananas week of golf.

"Almost jarred it," the commentator says.

Dahmen is seen as one of the more good-humoured guys on the tour.

His back-and-forths on Twitter with social media swing sniper Max Homa are quite amusing to witness.

Dahmen's caddie Geno Bonnalie has detailed before how he gave up his job to go and caddie for his lifelong friend Dahmen.

Both caddie and player displayed all the feels when they got the win.

Bonnalie saw the funny side of the scoring last week, stating that they needed to shoot a 51 on Sunday be in contention.

He posted these gems:

I hope these Hawaiian themed under britches bring us good luck. We only need to shoot 51 today to be in contention. @Sentry_TOC pic.twitter.com/jYOgca8tZm

Unfortunately we hit our 51st shot on hole 14 today. Still an amazing week w/ my man at the @Sentry_TOC

Can't wait to get back here again soon pic.twitter.com/A4pkn4rVTE