Three-time Tour winner Lucas Herbert was fuming he missed out on a Presidents Cup debut in 2022. 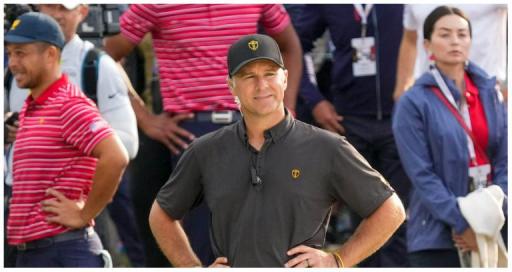 Australia's Lucas Herbert has revealed he was "really p***ed" off" to miss out on the International Presidents Cup team for the first time in his career this year, following an interview with Golf Australia.

Herbert, 26, clinched his maiden PGA Tour title at the end of 2021 and had impressed with a number of stellar performances in big tournaments prior to International captain Trevor Immelman making his six picks.

But unfortunately for Herbert there was to be no Presidents Cup debut this time around at Quail Hollow Club in Charlotte.

That did not sit well with him.

"I was really pissed off I didn't make that team," Herbert told Golf Australia ahead of this week's Australian PGA Championship at Royal Queensland.
"I thought I had a lot to offer and I felt like my form was decent leading up to it.
"I didn't think I was out of form, so I was pretty disappointed when I got the call."

Immelman ended up picking the following players in his 2022 International Team.

There was also no place for Ryan Fox, who many considered should have been in the starting lineup following his impressive DP World Tour season.

The International team comprised of a number of rookies, including Tom Kim, Taylor Pendrith and Christiaan Bezuidenhout.

The Internationals put up a valiant fight on the weekend but they ultimately went down 17.5-12.5 to Davis Love's United States team.

It marked their ninth consecutive defeat in the biennial contest.

Related: Morikawa unhappy after hearing what Immelman had to say about his career

Herbert has three career wins to his name, all coming within the last two and half years (2020 Dubai Desert Classic, 2021 Irish Open, 2021 Bermuda Championship).

Following the disappointment at not making the team, Herbert admitted he went on vacation and drank through the pain.

"To be honest, I was sat on a yacht in Miami drinking, so I didn't find it that tough to watch," said Herbert with a wry smile.

"Obviously a couple of them didn't play the way they would have liked that week."

Herbert, who now finds himself outside the top 50 in the Official World Golf Rankings, will be looking for a big week in Brisbane this week as he bids to play his way into next year's Masters at Augusta National.

He will need to make his way into the world's top 50 in the next two weeks in order for that to happen.

"My game's trending in the right direction at the moment, so whether it's at Christmas or one of the next cut-offs for the world rankings, I will be playing at Augusta in April, I'd like to think that," he said.

"I can't control everything but I do feel like there's not as much pressure as probably what it looks like."

Next Page: Jon Rahm calls OWGR a "joke" after learning he has not moved up in the rankings despite latest win