Hideki Matsuyama has been forced to withdraw from Tiger Woods' forthcoming Hero World Challenge in the Bahamas on the PGA Tour. 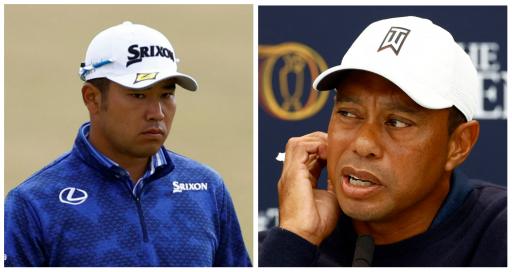 Hideki Matsuyama has reportedly been forced to withdraw from the forthcoming Hero World Challenge in the Bahamas, hosted by Tiger Woods.

Matsuyama has been struggling with multiple injuries throughout 2022.

The former Masters champion tried to play in the PGA Tour's Houston Open in November but a neck injury meant he withdrew from the tournament mid-way through the third round at Memorial Park Golf Course.

Related: Tiger's legendary caddie is coming out of retirement

@TrackingHideki believes that Matsuyama is now also out of Tiger's tournament in Albany, which will be played over 1-4 December.

Matsuyama's 2022 started out in superb fashion when he won the Sony Open but since then, the calendar year has been an almighty struggle for the Japanese superstar.

Do you remember this 3-wood from Matsuyama en route to victory in Hawaii? This was one of the shots of the year.

Matsuyama also withdrew from The Players at TPC Sawgrass because of a back injury and skipped the Valero Texas Open before The Masters.

The 30-year-old also had to withdraw from the 3M Open after the third round and also decided against playing the FedEx St. Jude Championship.

It is not yet known who Tiger will replace Matsuyama with in the field.

Previously, Will Zalatoris also withdrew from the tournament as he continues to recovery from a back injury which forced him out of the Tour Championship at East Lake.

Here's the full field for the Hero World Challenge:

This news comes as the PGA Tour confirmed the full results of their 2022 Player Impact Program.

To the surprise of absolutely nobody, Tiger scooped the $15m top prize, just ahead of Rory McIlroy.

The criteria previously saw only the top-10 players rewarded with cash bonuses from the PGA Tour, but it was slightly modified for 2023.

Along with the absence of those who now play for LIV Golf, it meant that additional spots opened up.

Matsuyama was the benefited in this regard, as he scooped $2m alongside the PGA Tour's Rookie of The Year - Cameron Young - and Viktor Hovland.

Hovland is the defending champion of the Hero World Challenge.

As for Tiger, he has rubbished suggestions that he will be playing the tournament in a golf cart.

Here's to hoping that Matsuyama's injury isn't as serious as it appears to be.

Next page: Tiger's red shirt worn in first Masters after sex scandal up for auction