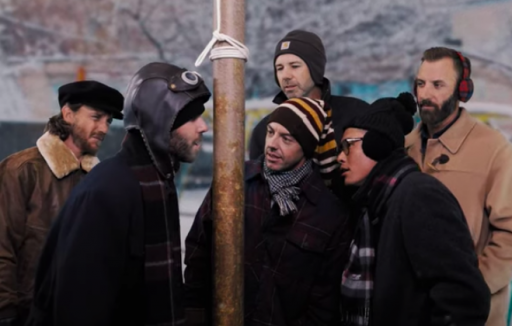 TaylorMade and its PGA Tour staff are clearly as excited for Christmas as the rest of us as they have produced a fantastic video to celebrate the holidays.

In the film, a group of young boys are gathered around a pole. One boy named Schwartz dares another boy named Flick to put his tongue on the pole to see if it will stick.

He refuses but once Schwartz lays down the famous Triple Dog Dare, Flick has no choice but to take on the challenge. He foolishly goes through with it.

RELATED: IAN POULTER SHARES HOW HE "GAVE UP" WITH BBC SPOTY AFTER LATEST SOLHEIM CUP SNUB

His tongue sticks to the pole, causing him to scream hysterically. In the TaylorMade video, Rory McIlroy and Matthew Wolff are the main protagonists.

The four-time major-winner throws the Triple Dog Dare at Wolff who steps up to the plate and puts his tongue on the pole. Much like the famous film, his tongue sticks.

Fleetwood, Johnson, Garcia and Morikawa all look on and grimace, wrapped up in their warm winter clothing. Garcia looks particularly disturbed by what is taking place.

Wolff screams in pain just as Flick does in the movie clip, but maybe not as loud and not as hysterically. It is fair to say the creative team at TaylorMade deserve a round of applause.

We have seen this group of players take on different challenges on TaylorMade's YouTube channel along with Tiger Woods, such as the Happy Gilmore challenge.

We have not quite seen something as funny and as unique as this, however, it is always entertaining to see a different side to our favourite players off the course.