Watch: Tiger Woods DISTRACTING Charlie on the putting green, just like his dad 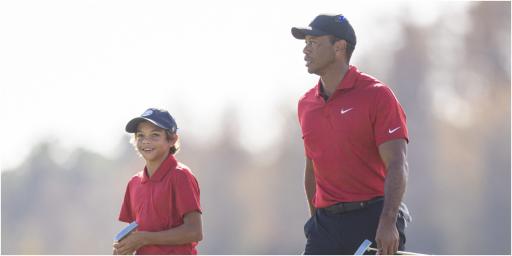 When Tiger Woods was young his father used to jingle change in his pocket to try and put him off.

Now it appears that Woods, 45, is trying to implement the same methods his father bestowed upon him when he was a youngster to Charlie.

This great video from the PNC Championship shows Charlie rolling some putts on the practice green before Friday's round in Orlando.

Walking across the putting green, Woods senior grabs a Bridgestone golf ball from his pocket and chucks it in front of Charlie.

Of course, Charlie carries on anyway and makes the stroke.

Love this. @TigerWoods doing exactly what his dad did to him as a kid to Charlie. Trying to distract him with anything like rattling keys or making noise or throwing a golfball in his sight line forcing him to concentrate. @TWlegion pic.twitter.com/Az2At2Cx67

"As I've explained to him it's like my dad explained to me. No matter how many people are around you, whether it's zero or millions, it doesn't matter it's the same shot. It doesn't change. It's exactly the same shot, the ball's not moving. It's just sitting there. Now you gotta hit the shot. So whether he's playing at home with his buddies, whether he's playing with me or in tournament golf or if he's playing in front of TV crews, it doesn't matter, it's the same exact shot. And just having that mindset, he's starting to understand that and learn that and he showed that today."

Clearly Charlie wasn't distracted by the camera crews and the millions of people watching around the world.

He hit some great shots and appears to favour a nice, gentle fade with his driver.

His approach play was decent and his putting was phenomenal.

The pair managed to reach 25-under in the 36-hole scramble format and were two strokes behind the winners John Daly and his son.