This is everything you may have missed in the golf world this week... 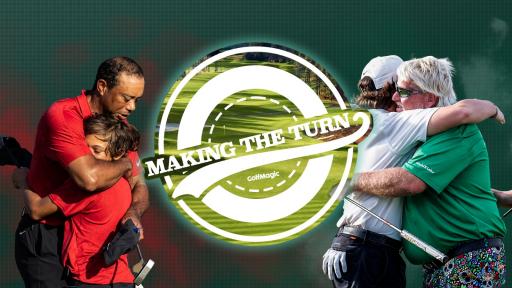 Welcome to Making The Turn, where GolfMagic rounds up everything that has happened in the golf week.

It was a fairly quiet one, truth be told. Tiger Woods returned to golf...

Oh yeah. Tiger Woods. He's playing again. Well, he pegged it up at the PNC Championship with his son Charlie.

They combined for 11 consecutive birdies on Sunday at the Ritz-Carlton Golf Club in Orlando but ultimately finished second.

Woods displayed speed and power and in truth none of us should be surprised.

There were a few winces and some looks of discomfort from Woods, who described most of his shots as "slappy cuts".

He just wanted to get the ball out there in play, he later said.

Of course, his performance will only add to the speculation about what he might do in 2022 and where he might play.

The Open championship? You can't bet against that.

John Daly and his son, now going by John Daly II, picked up the title at the sixth time of asking.

But what else happened? Let's dive in.

Nelly met Tiger for the first time. Her reaction says it all. pic.twitter.com/Wn2yEFP42h

Nelly Korda played in the PNC Championship with her father Petr, who two months ago bought a new set of clubs and started practicing hard. The pair put on a decent showing, finishing eighth. Korda's brother Sebastian, also a professional tennis player, was on the bag. The Korda family asked the big cat for a picture and her reaction was one of undiluted joy.

Spieth came back to the fold this year, winning in Texas. The new dad looks like the Spieth of old and it has seen him become one of the betting favourites for the Masters. He's also said he is going to try using aimpoint, after consulting with Justin Thomas's putting coach John Graham.

The big cat previously told how it was great to have old faithful - his Scotty Cameron putter - back in his hands during his rehab but the 45-year-old debuted the 2022 TaylorMade driver, which looks like it has a red face. Woods' speed was up there this week. At times he reached the tour average for ball speed (matching up with Collin Morikawa) and even sent one past Justin Thomas. Hopefully we get to see Woods use this new piece of equipment next year.

DeChambeau took to Instagram to post the fact that he had achieved a frightening new ball speed of 221mph with his driver. It truly is a staggering number and his ultimate goal is to reach 225mph. If he can keep these tee balls on the planet in 2022 it really could be the year of Bryson. GolfMagic decided to ask him during one of his Instagram Live sessions if he had the green jacket tailored yet for the Masters but he laughed and declined to answer. DeChambeau was spoken highly of by Tiger Woods recently, who paid tribute to his dedication in trying to keep getting faster. Even Thomas was filmed hitting drives with a wide base and lifting that left heel off the ground to create more speed. We will all be watching DeChambeau, 28, with interest in 2022.

The controversial player impact program will get a bigger cash boost next season. Even more money will be dished out to those who have the biggest impact on "growing the game". GolfMagic looked at the progam in finer detail. And one man, Peter Kostis, decided to voice his opinion on the subject, describing it as "an absolute joke". Even Phil Mickelson chimed in on the debate.

What more could be said about these two that hasn't already been written about. It was a fabulous watch. Charlie Woods hit some cracking shots and even stiffed one at 17 - taking on the water - and putting it closer than anyone including the professionals. The Woods pairing made birdie after birdie on Sunday. Charlie appeared to enjoy the attention from the crowd, obliging with comments of "Thank you" after he ripped that beautiful butter cut down pretty much every fairway while his dad watched on. If this is truly all we are ever going to see from Woods again then this is a fitting end. We hope it isn't, of course, but it was great to see them both playing so well.

Final 10 sneak into the Masters

The invitations have not yet been sent out but we now know who is inside the world's top 50 and who will be making appearances at the 2022 Masters. Tommy Fleetwood, Lee Westwood and Tyrrell Hatton headline the British players who made it. While Cameron Tringale, ultimately got the frustrating finishing place of 51st in the rankings.

All of the attention may have been on Charlie Woods but 11-year-old Karl Stenson, the son of Henrik, enjoyed ribbing his father at the PNC Championship dinner. His dry wit was too much for the crowd, which was in fits of laughter. Very nicely done, Karl.

NEXT PAGE: THE BEST SHOT TRACERS FROM TIGER AND CHARLIE