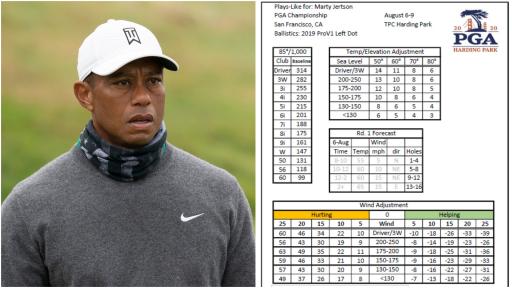 The PGA of America recently announced that distance-measuring devices are set to be allowed at this year's PGA Championship in an attempt to combat slow play, but working our 'plays like' distance is a entirely different ball game.

Later this year at the US PGA Championship, players and caddies will be allowed to use devices such as laser rangefinders to see exactly how far they are away from the pin.

RELATED: Distance-Measuring devices to be used at PGA Championship to combat slow play

This is of course useful information, but players must take into account factors that can effect distance, such as temperature, wind and elevation.

Although players will be allowed the use of a compass, more technical devices or measuring elevation change will not be permitted.

Marty Jertson, Vice President of Fitting & Performance for PING, also happens to be quite the player and played in both the US Open and PGA Championship last year.

After hearing the news regarding distance-measuring devices, Jertson tweeted: "Getting your yardage is easy. Calculating the correct Plays-Like is hard."

Getting your yardage is easy

Along with the caption was a picture of Jertson's Plays-Like distances for last year's PGA Championship at TPC Harding Park and golf fans were impressed with how much detail goes into the calculations.

"Reason why they should remove those green book ! A good player / caddy should know how to read a green and not « cheating » with using a third party information," said one golf fan who would like to see professional players stripped of their green books, an opinion we have heard countless times before.

"I forget that you're a big nerd, who is really good at golf," said another fan.