Camilo Aguado got through the Monday qualifying event to seal his first spot in a PGA Tour tournament, which proved to be an emotional moment. 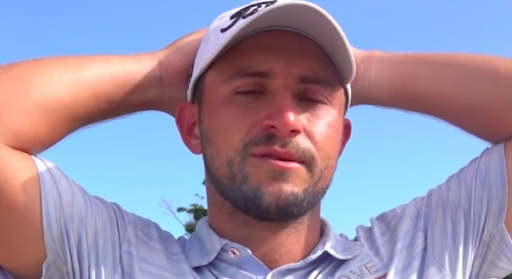 The PGA Tour is not just about the superstars competing for the top prizes. Sometimes, the best stories come from those who are just trying to make ends meet.

Camilo Aguado has only ever competed in one Korn Ferry Tour event and several events on the PGA Tour Latinoamerica and the Forme Tour.

The World Wide Technology Championship will be the debut PGA Tour appearance for the Colombian, but this outcome came with much drama as every Monday qualification event does.

Aguado shot a solid 67 in the preliminary tournament at Playa Paraiso in Cancun, which proved to be enough to qualify alongside David Lipsky, Braden Thornberry and Andrew Novak.

RELATED: THE BEST TIGER WOODS QUOTES: "I MAY BE OUTPLAYED, BUT I'LL NEVER BE OUTWORKED"

It could have been very different if Bo Hoag had not three-putted the final hole of the tournament which led to a score of 68. But Aguado is in and the emotion poured out.

"It's just so big, I didn't start playing golf when I was a kid like most of these guys, I started late. When I started, you obviously have this dream but you never know if it is going to happen," said Aguado.

"So the fact that it has happened is just surreal. I've seen these guys for so long and just to be a part of it is so big."

The 27-year-old paid tribute to the support of his family on his journey to the PGA Tour. He did not begin playing golf until he was 15 which is a late start when you consider the very young ages that professional athletes begin at.

Fellow mini-tour competitor Mike Visacki, whose journey has also been shared with the golfing public, offered his congratulations too.

Visacki became emotional when he qualified for the Valspar Championship last season and he developed a touching bond with Justin Thomas as well, who financially helped Visacki with his career.

Aguado has joined the strong group of South Americans who are hoping to pick up a victory at El Cameleon Golf Club this week.

NEXT PAGE: GREG NORMAN ON SAUDI-BACKED GOLF SERIES: PLAYERS ARE DYING TO GET OUT THERE