Report: Bubba Watson situation cleared up after he was urged to quit PGA Tour

The PGA Tour have reportedly sent a memo to players clearing up the situation involving Bubba Watson after the LIV Golf player was urged to resign. 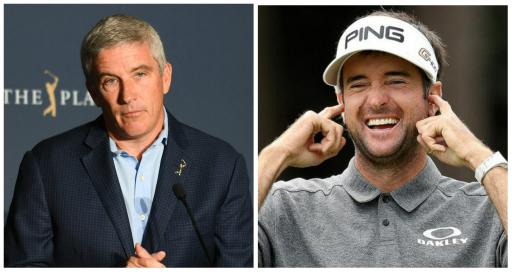 Bubba Watson was urged to quit the PGA Tour because of the dramatic impact it would've had on four pros hoping to play the Korn Ferry Tour Finals.

And it appears that the PGA Tour have now cleared up the situation after LIV Golf Invitational Series player Watson, 43, terminated his membership.

It was only a week ago where players Anthony Quayle, Chris Naegel, Rick Lamb and Matti Schmid appeared to have accumulated enough FedEx Cup points as non-members to finish inside the top 200.

That would make them eligible for the first Korn Ferry Tour Finals event next week at Albertson's Boise Open.

However, because Joohyung "Tom" Kim won the Wyndham Championship last week, a nightmare scenario developed for the four players.

Kim, 20, is also a not a full PGA Tour member and was playing out the remainder of the season after accepting a special temporary membership.

His stunning victory at Sedgefield Country Club meant that he could accept a full membership next season. Moreover, his win bumped everyone down below him one spot.

This is where Watson came in. He was ranked 151st in the FedEx Cup points list. He's already signed with LIV Golf after praying with his wife over his future path.

He has not played on the PGA Tour since the PGA Championship because of a long-term injury to his meniscus.

Watson was not suspended by the Tour because of a technicality. He had not actually hit a tee shot in a LIV Golf event.

A memo released by PGA Tour commissioner Jay Monahan confirmed this news, according to GolfDigest. However, the memo did not actually mention Watson by name.

The memo said: "Today, the Policy Board determined that eligibility for the 2022-2023 season will be finalized after the Korn Ferry Tour Championship.

"Accordingly, the FedEx Cup Playoffs and Eligibility Points List will continue to update through the conclusion of the Korn Ferry Tour Championship."