Rory McIlroy could reach the World No.1 spot at Congaree Golf Club this week, which would take him a step closer to the record of a certain LIV Golf commissioner... 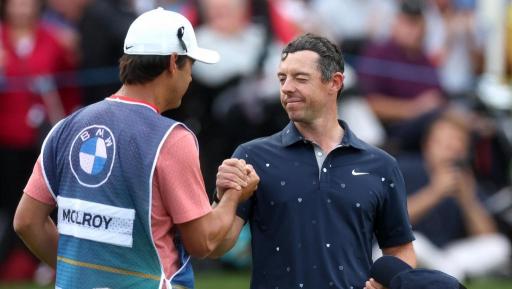 Defending CJ Cup champion Rory McIlroy wants to accumulate 332 weeks at the top of the Official World Golf Rankings, which would be one more than LIV Golf Tour commissioner Greg Norman.

Speaking ahead of his first PGA Tour start of the revamped 2023 season, McIlroy admitted that he often looks at the OWGR website to keep up to date with his place, which is currently number two after coming tied for second at the BMW PGA Championship.

The Northern Irishman, 33, has spent 106 weeks at the top of the world rankings in his career. This is nine weeks more than Sir Nick Faldo and only Norman (331 weeks), Tiger Woods (683 weeks) and Dustin Johnson (139 weeks) have held it for longer.

McIlroy won his 20th, 21st and 22nd PGA Tour titles last season and although he is still majorless since 2014, he is in incredible form and breathing down Scottie Scheffler's neck who has been World No.1 for 28 weeks.

If the four-time major champion wins the CJ Cup again and Scheffler finishes worse than tied for second, McIlroy will return to the top spot. It is all to play for in South Carolina, but he couldn't help having another little dig at his Australian verbal sparring partner.

He then referred to the popular Twitter account Nosferatu (@VC606) which provides updates and information on movements in the world rankings.

"He tweets it out pretty much every Sunday night, so you check that. Then you check the OWGR website on Monday morning just to see where you are in terms of points and how close you could get," he added.

"I don't keep as much of a close eye on it as I used to, but still it’s a point of pride for all of us out there to be highly ranked. To get to No. 1 in the world at whatever you do is an unbelievable accolade and something that you should be proud of."

After Norman claimed that Dustin Johnson and Cameron Smith were the best two golfers in the world after the LIV Golf Chicago Invitational, our readers voted McIlroy as the best player in the world when put up against Johnson, Smith and Scheffler.

McIlroy took aim at the two-time Open winner again after winning the RBC Canadian Open last season. This victory took him to 21 wins on Tour which was one more than Norman's haul on the circuit.

Norman, 67, responded with: "I take it as a compliment that (McIlroy) wanted to beat my 20 PGA Tour wins. His next goal should be to win more than 91 tournaments globally or to maintain No. 1 in the world for more than 331 weeks."

Over to you, Rory.