LIV Golf's Greg Norman does not believe Scottie Scheffler is the real World No.1 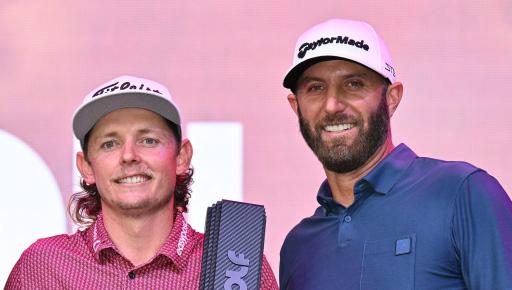 LIV Golf CEO Greg Norman believes Cameron Smith and Dustin Johnson are the best two players in the world right now, and not PGA Tour star Scottie Scheffler, who is the official World No.1.

Poll Vote: GolfMagic Readers vote on who they think is the REAL World No.1 right now - do you agree?!

Both players accepted close to $150 million to join the controversial LIV Golf Tour that is bankrolled by Saudi Arabia's Public Investment Fund.

With LIV Golf Tour events not counting Official World Golf Ranking points as things stand, Smith has since slipped from second to third in the world since he made the move earlier this month.

Things have got even worse for Johnson, who resigned his PGA Tour membership to join LIV Golf from the very start back in June.

More: How much they all won at LIV Golf Chicago

Johnson, a former World No.1, now unthinkably finds himself down at 23rd in the rankings.

He can at least take some consolation from the fact he has amassed more than $12.5 million in tournament earnings from just five LIV Golf events.

But that will be a story of things to come for all LIV players the longer their events are shut out of receiving OWGR points.

In an article published by Washington Post last week, it is understood LIV Golf could be waiting until 2024 before they receive points.

Norman is not prepared to wait much longer though, and his frustrations clearly boiled over in his latest social media rant following Smith's three-shot victory at LIV Golf Chicago.

In the eyes of Norman, it is his two LIV Golf stars Smith and Johnson who are the "real best two players in the world" right now.

Smith has won four times in 2022, including the Tournament of Champions, The Players Championship, the 150th Open Championship and LIV Golf Chicago.

Johnson only has one victory to his name coming at LIV Golf Boston.

That means Norman does not give much thought to Scheffler, who is the official World No.1 having won four times on the PGA Tour this season including a maiden major title at The Masters in April.

Scheffler was also named 2021-22 PGA Tour Player of the Year.

Norman also fired yet more shots in the direction of the PGA Tour, as too those looking after the OWGR.

"Who's questioning the real #1 and #2 in the world?" wrote Norman on his caption to a post of Smith holding the trophy in Chicago.

"The #LIVGolf team is a family. Everyone is in this together. This has never happened on the PGA Tour.

"As Cam Smith has said, we have given golf a heartbeat.

"How can the OWGR ignore the fact that the two best players in the world - Cameron Smith and Dustin Johnson - play on the LIV Golf Tour?

"When the fans speak, listen. Golf is a force for good."

Next Page: Why is Greg Norman's golf tournament still on the PGA Tour schedule this season?!

Who do you reckon is the best player in the world right now - Scheffler, McIlroy, Smith, Johnson or someone else? Share your thoughts and comments over on the GolfMagic social media channels, or come and visit us over on YouTube.