Rory McIlroy on post-Open gripes to Erica: "I give her credit for listening!"

Rory McIlroy has lifted the lid on his miserable night after missing out on the 150th Open Championship at St. Andrews, paying tribute to wife Erica Stoll. 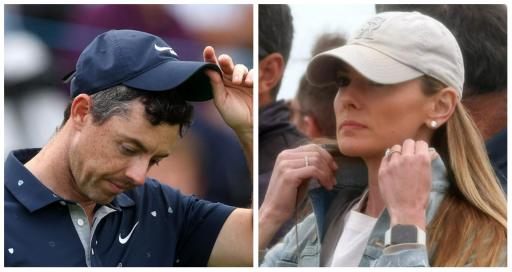 There were many takeaways from Rory McIlroy's interview with the Sunday Independent, chief of which was the revelation the Northern Irishman and Tiger Woods' Open preparations were hampered after they both contracted COVID19.

Others included how McIlroy, 33, believed he had won the 150th Open Championship even when Cameron Smith tied him for the lead at St. Andrews before going on a back nine tear.

McIlroy also revealed how it felt "pretty s**te" that news got out he was ditching long-time swing coach Michael Bannon before he had a chance to speak with his instructor. They are back together now.

Related: McIlroy reveals the equipment tinker that changed his fortunes

Elsewhere, there was the revelation that Bryson DeChambeau - now a LIV Golf player who is suing the PGA Tour - really did get in his head.

You may remember that DeChambeau went on an almighty bulk two years ago. McIlroy didn't emulate the bulk, but he wanted the speed like DeChambeau. Despite seeing drives go 30 or even 40 yards past his playing partners, McIlroy realised his swing was deteriorating.

DeChambeau has also expressed regret about this, saying his extreme diet was mistake.

Elsewhere McIlroy explained further what happened in the immediate aftermath of his Open heartbreak.

"Yeah, there were a lot of people up there that I knew, but I couldn't face it. I just couldn't. I wanted to crawl into a hole. We stayed in the room and ordered some food and a bottle of wine."

"I'm sure there was a bit of 'I don't feel like I did that much wrong.' Because at that point you start to think about things: 'I could have got it up-and-down on 3. I should have made birdie on 9. I should have made birdie on 12.'
"You know, all the s**t Erica just doesn't want to hear. But I give her credit for sitting there and listening to it. I'm sure we tried to watch something on TV to get away from it."

Related: Why Tiger has withdrawn from Hero World Challenge

McIlroy did bounce back after missing out on the Claret Jug, taking down the Tour Championship at East Lake which meant he pipped Scottie Scheffler to the FedEx Cup, winning $18m.

He also placed fourth at the DP World Tour Championship in Dubai which ensured he finished top of the rankings for the fourth time in his career on the European-based circuit, cementing his position as the World No.1.

McIlroy also defended his title at the CJ Cup on the PGA Tour in October.

Next page: How much money has Rory McIlroy won in 2022?