McIlroy reveals equipment switch that changed his fortunes: "I was struggling!"

Rory McIlroy has spoken of the small equipment change that gave him momentum after missing the cut at the Texas Open before the 2022 Masters. 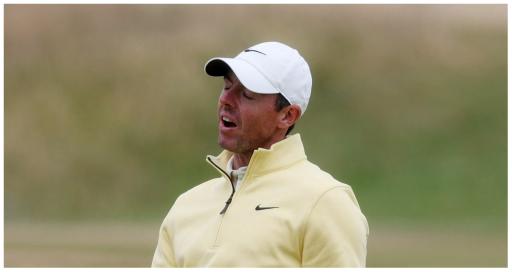 Rory McIlroy says changing golf balls before the 2022 Masters turned his "whole year around" after the struggles that culminated in a tearful greenside interview at the Ryder Cup when Europe's miserable fate was all-but confirmed.

McIlroy reigned supreme once again over the weekend when he finished top of the DP World Tour Rankings for the fourth time.

The Northern Irishman revealed he spoke to his caddie Harry Diamond walking up the fairway on the 72nd hole at the Earth Course at Jumeirah Golf Estates about what a long year it has been.

Cast your mind back to the week before the 86th Masters at Augusta National and McIlroy was way off the standard he is accustomed to.

Rounds of 72 and 73 meant he missed the cut at the Valero Texas Open at TPC San Antonio. That was off the back of a T-33 finish at the Players Championship.

McIlroy told the media in Dubai:

"Yeah, [I am] very proud of myself [this year]. Harry [Diamond] and I were talking going up the last fairway. It seems like it's a long time since San Antonio, the Texas Open the week before Augusta this year when I was sort of struggling a little bit and made a couple of tweaks with my game and with my equipment.
"[I] went to a different golf ball. It seemed like just after that, my whole year turned around and got a ton the momentum at the Masters and just went from there."

"I think one of the things I'm really proud of over the last few years is I don't feel I have to rely on one aspect of my game. I think if my driving isn't there, then my putter bails me out.
"If my putter isn't there, my iron play bails me out. I feel like when you get to this level, it's like, okay, how can you make those incremental improvements to get better, and I think my goal has been to just become a more complete golfer and I feel like I'm on the journey to doing that.
"But I definitely -- I'm as complete a golfer as I feel like I've ever been, and hopefully I can continue on that path."

McIlroy also said he plans to take one full week off his phone to spend time with his wife Erica Stoll and daughter Poppy.

He will be back in action in the next iteration of The Match playing against Jordan Spieth, Justin Thomas and Tiger Woods.

Then McIlroy will start 2023 in Dubai. McIlroy has also confirmed that he plans to play the Irish Open next year at The K Club.

McIlroy missed his home open at Mount Juliet this year. It was won by Poland's Adrian Meronk.

Next page: There is "no debate" Rory McIlroy is World No.1