Sam Burns has revealed the reason why he has decided not to play the WGC-Dell Technologies Match Play. 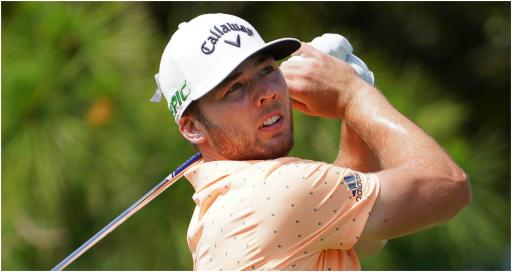 The PGA Tour official communications team provided a statement on behalf of Burns saying that it was a difficult decision.

But after three long weeks on the road the 25-year-old, who has won three times in 12 months, wants to rest up before the major season.

"I have made the difficult decision to withdraw from the WGC-Dell Technologies Match Play," Burns said.

"After three long weeks of golf, I feel that taking this week to rest and prepare for the busy stretch ahead is best.

"I appreciate the support and look forward to seeing everyone soon."

Riley began the final round three strokes ahead and despite having a putt from 15-feet to claim victory, Burns won on the second playoff hole.

He let out a massive roar after sinking the monstrous birdie putt and emotionally paid tribute to his the team around him.

Burns later revealed in his winner's press conference that he was struggling a lot with his game after a frustrating finish at The Players.

He was in contention come Sunday - where Cameron Smith emerged $3.6million richer - but his charge fizzled out.

TPC Sawgrass was hit by severe rain which led to the tournament finishing on a Monday for the first time since Fred Funk won in 2005.

That led to having a knock-on effect for Burns with travel arrangements.

He also was not feeling good with his game and called for some emergency help with his coach Brad Pullin.

Pullin drove for more than 12 hours to meet and work with Burns and it paid dividends.

Burns said of his coach: "I mean usually we try to plan like, hey, come every three or four events, but he was down earlier in the week at [the] Players and I just called him on Monday and I was like, 'man, I'm struggling, I'm not really sure.'"

He added: "So he drove 12 hours on Tuesday or Monday, Tuesday, I don't even know and we just got to work.

"So that just, I've always known this about him, it really just shows me that he cares and he is passionate about what he does and that he would do anything for me."

Billy Horschel is the defending champion at Austin Country Club.

Bryson DeChambeau has committed himself to the field and is likely to make a return from injury.