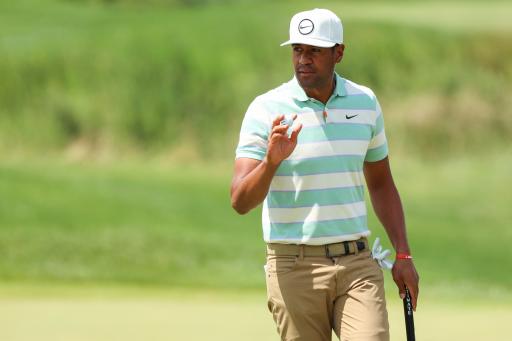 Tony Finau powered to his third PGA Tour victory at the 3M Open after overnight leader Scott Piercy collapsed on the back nine.

Finau started the day as the chaser in Maine, Minnesota and in truth still had it all to do as he headed into the back nine, turning in 1-under.

But the big American, who has been heavily linked with LIV Golf, powered to the finish with birdies at 11, 14, 15 and 16.

At one point he trailed by as many as five strokes after eight holes at TPC Twin Cities.

Piercy, 43, endured problems of his own yesterday. A new pair of shoes caused a "nickel sized" blister on his heel.

It meant he was forced to take his shoe off in between shots as he extended his lead in the weather-delayed tournament.

Piercy made the turn in level par but his problems began at the par-4 14th hole. It was a truly ugly hole and not for the faint of heart.

His tee shot was right and ended up in the fairway bunker. Not only was his golf ball plugged but it was above his feet.

With almighty chop the American tried to get the ball out but failed. His next shot found the water and it led to a triple bogey.

In one instant he trailed Finau by two strokes and that, as they say, was that. He even made bogey at the next hole to compound his misery.

Finau even endured a heart-in-mouth moment at 17 when he almost stuck his tee shot into the water. It ended up being a memorable par after his golf ball somehow managed to stay dry.

"I called bank on that tee shot," he later joked. Finau also got choked up as he dedicated the victory to his mother who died in 2011 in a car accident.

The 6ft 4ins pro kissed his golf ball and had a chuckle to himself as he walked to the 72nd hole to chants of his own name.

His tee shot at the 18th found the water but he still had a big enough lead over the chasing pack as Piercy was wet with his tee shot at 17.

In the end his margin of victory was by three strokes. He took home $1.3million for the win. Here's the full payout info.

Finau's previous victories came at the 2016 Puerto Rico Open and the 2021 Northern Trust. Both were won via a playoff.