Johnson was asked about Phil Mickelson as he was unveiled as the next Ryder Cup captain of the United States. 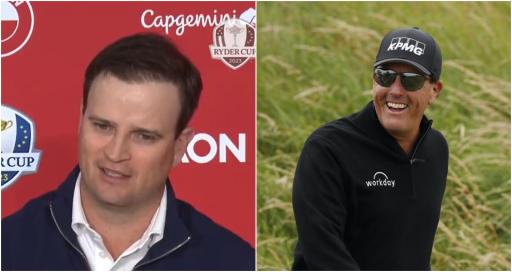 The worst kept secret in all of golf is now confirmed: Zach Johnson will be the next United States Ryder Cup captain.

Johnson, 46, will lead the team in Rome at Marco Simone Golf & Country Club as they attempt to win in Europe for the first time in 30 years.

The 12-time PGA Tour winner and two-time major champion is keeping the tradition of six captain's picks before the 2023 showdown.

The PGA of America has also added Jordan Spieth, Justin Thomas and Steve Stricker to the Ryder Cup committee.

Familiar face Stricker was also confirmed as a vice-captain to Masters champion Johnson after he led the team to a 19-9 victory last time out.

Stricker revealed that a mystery illness almost claimed his life after he disappeared from public view after the memorable September win.

He was an overwhelmingly popular captain and was highly spoken of by the team and his rookies that obliterated the ageing Europeans.

It was not outside the realms of possibility that he would lead the side again but he quickly ruled himself out.

Johnson paid tribute to the simplicity and effectiveness of Stricker who allowed the 12 players "freedom and a voice" when they won.

"I'm excited. I'm extremely excited. I have all the emotions running through me," Johnson said in his press conference.

"I'm just -- honor, pure honour comes to mind more than anything," he added.

"Just knowing that I can lead this great team in Italy and represent my country, again, is flattering."

One topic - one controversial topic - was the subject of Phil Mickelson, who is currently taking some time away from the game.

Mickelson has severely damaged his reputation and sponsors have paused or terminated their involvement with him.

That was after he told a biographer he was trying to use the Saudi Golf League to leverage the PGA Tour into making changes.

Mickelson has apologised and called his comments reckless after he was viewed by many as amoral.

Johnson was asked about Mickelson and if he would like him to be one of his vice-captains next year.

He replied: "Phil is a friend of mine on and off the golf course and I'm going to leave it at that."

Have the PGA of America explicity said he cannot have Mickelson as a vice-captain?

"That conversation has not taken place and, you know, they've been in full support of me to represent this team and certainly help me navigate any and all, small and big decisions along the way."

Watch what Johnson had to say below: