Stewart Cink won the tournament in 2000 and 2004 and he carded a 1-under-par 70 on Sunday to win at Harbour Town Golf Links by four shots. 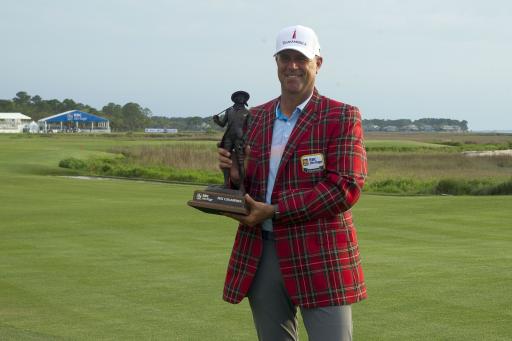 Stewart Cink has won the RBC Heritage for the third time in his career, finishing four shots clear of Emiliano Grillo and Harold Varner III on 19-under-par.

Cink's win at the Safeway Open earlier in the season was his first victory on the PGA Tour since he became Open champion in 2009. The veteran joined Davis Love III and Hale Irwin as the only players to have won the RBC Heritage at least three times.

It was a special day for Cink who was joined by his wife Lisa and his son Connor on the final green, as well as his other son Reagan who caddied for him throughout the week.

"I don't know if I have words, it just keeps getting better," said Cink.

"Winning with Reagan and him caddying back in the fall was amazing, but Connor couldn't be there because it was his birthday!

"But today he just flew in and changed his flight from Wyoming to be here just for this, and there was no way I wasn't going to win with him coming all the way down here.

"It's just so great to have this whole family here, that means so much to me. It's just a blast I can't explain it."

Cink entered the final round with a commanding five-shot lead over fellow American Collin Morikawa on 18-under-par.

The 47-year-old was steady and consistent in the final round as he made a birdie at the 5th hole and a bogey at the 12th hole to go down the final stretch with a four-shot lead.

Grillo did his best to chase down the leader with birdies at the 2nd, 5th and 7th holes to move to 15-under-par after his first nine. However, a bogey at the par-4 12th dented his chances of a second PGA Tour title.

Varner began the day on 10-under-par and three birdies on the front nine helped the 30-year-old creep up the leaderboard, but a 5-under-par 66 was not enough to challenge Cink.

The Argentine Grillo did give the leader something to think about with three holes remaining, when he chipped in for birdie on the par-4 16th hole.

But the five-time American Ryder Cup member showed his calmness on the par-3 17th hole, when he hit a superb tee shot to make birdie and put the outcome beyond doubt.

Cink safely parred the 72nd hole to secure his eighth PGA Tour title and become only the second multiple winner on tour this season, alongside Bryson DeChambeau.

NEXT PAGE: GOLF FANS REACT AS IAN POULTER WATCHES F1 DURING LAST ROUND AT THE RBC HERITAGE