"Go get that, dad!" Jordan Spieth will take on Tiger Woods (we hope) at PNC

Jordan Spieth has confirmed to SiriusXM PGA Tour radio that he will make his debut at the 2022 PNC Championship with his father Shawn. 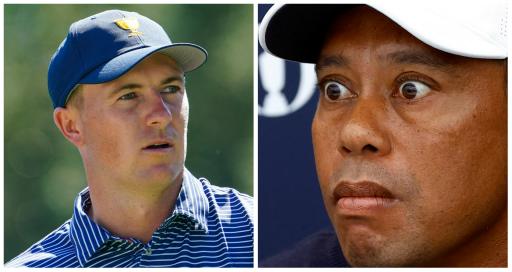 Jordan Spieth has confirmed he will make his debut at the 2022 PNC Championship alongside his father Shawn.

The father/son jaunt is a popular team event. It will be contested in December at the Ritz-Carlton Golf Club in Orlando.

It is a unique event as the qualifying player must be a major winner or have won The Players (which is touted as the fifth major).

Related: JT won't let Jordan Spieth forget how bad he was in 2019

Last year, all eyes were on Tiger Woods and his son Charlie Woods. At the time, the 15-time major champion was sending the golf world into a frenzy as speculation was mounting about his potential return to golf.

This was following his high-speed car crash when he rolled his luxury Genesis SUV and golf fans feared the worst. Justin Thomas later said he was horrified when he saw Woods' leg.

Woods made his return to the public eye when he hosted the Hero World Challenge in the Bahamas before confirming he would play with Charlie in the PNC Championship. He used a golf cart.

Related: Will Zalatoris urges Tiger Woods to use a cart

Charlie recently gave his very first media interview after shooting a career-low 68 in a junior event with his dad on the bag.

The duo combined to shoot a Sunday 59 in the scramble event that was won last year by John Daly and his son John Daly II, beating the big and little cat by two strokes.

LPGA Tour superstar Nelly Korda, who played in the tournament with her father,  was filmed absolutely beside herself with joy and nerves as she asked Tiger for an autograph.

Spieth confirmed the news he will play with his father on SiriusXM PGA Tour Radio after helping the U.S. lift the Presidents Cup.

The 29-year-old was simply unstoppable at Quail Hollow Club as he helped the U.S. side defeat Trevor Immelman's International side 17.5 to 12.5.

Spieth moved his Presidents Cup record on home soil to a ridiculous 8-0-0.

He partnered his good friend Thomas and was involved in moments of pure hilarity.

Spieth was filmed being overly enthusiastic with his approach to ping pong.

While Thomas - who was involved in another gimme controversy - amused golf fans with his facial expressions during a live TV interview with Spieth.

The PNC Championship was originally known as the Father/Son Challenge and it was first contested in 1995.

Spieth has previously had his father Shawn caddie for him in PGA Tour events in the absence of his caddie Michael Greller.

But now the pair will be on the same team.

Next page: Tiger "didn't look right" when caddying for Charlie