Joaquin Niemann took the time to pay tribute to Tiger Woods after winning the Genesis Invitational at Riviera. 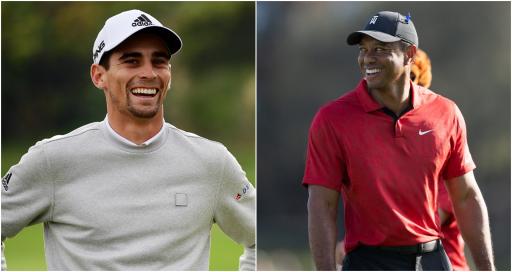 Joaquin Niemann looked as if he was going to runaway with the Genesis Invitational like a prime Tiger Woods at Riviera.

He slept on the lead every single night and we were discussing just how big the margin of victory would be. Five, six, seven shots?

In the end, that margin was only two strokes as Collin Morikawa and Cameron Young applied a little bit of pressure to dry and derail him.

When Niemann tapped in for par at the 18th hole, it was his 265th stroke of the week. He had previously set a 54-hole scoring record.

It earned him his second PGA Tour victory at the age of 23 years old. That previous win came at the Greenbrier Classic in 2019.

Incidentally, that win was by six strokes over Tom Hoge, who only this season stepped into the winners' circle at Pebble Beach.

Niemann's victory marked the end of a week that was dominated by talk of the Saudi Golf League in the wake of Phil Mickelson's comments.

When it came to discussing that this week, Niemann shied away from commenting. He just did not want to talk about it.

At his winner's press conference, that subject was tentatively approached again. Niemann had a different answer.

"I'll be -- I think there's nothing better like what I'm feeling right now. Winning a PGA Tour event, getting a trophy, having Tiger there, all the history behind, there's nothing that can compete with this."

"It was awesome having Tiger there. I haven't seen him since probably a year. Everybody knew what happened here one year ago, which was pretty sad.

"Being able to see him doing as well as he's doing is awesome. It talks pretty well how good he is in any aspect of golf and life.

"He's awesome, he's one of my idols. I always watched him on TV and I still do. Having Tiger on site receiving the trophy is something special."