Tiger Woods is reportedly admired by NFL wide receiver Deebo Samuel, who wore his Sunday red under his jersey in the playoffs this weekend. 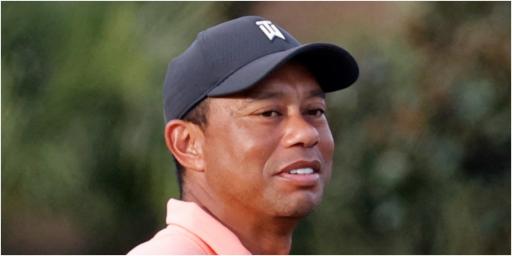 Deebo Samuel, the San Franciso 49ers wide receiver was spotted wearing some Woods clothing in the NFL over the weekend.

Eagle-eyed Woods fans noticed his traditional red jersey with the faded TW logo during the 49ers' game against the Dallas Cowboys.

Samuel, 26, appeared to channel his inner GOAT when he ran for a 26-yard touchdown in the third quarter immediately after an interception.

He was the star player of the game tallying 110 yards from scrimmage. Of those yards, 72 came from the ground in a dominant 49ers display.

Don’t really have a better pic unfortunately, checked the photographer images but couldn’t find anything from the back, it was a very small detail that was caught and was definitely a red mock. Believe he has worn a white mock in recent games as well. https://t.co/8XaTxrfITN pic.twitter.com/CMVToYqny6

Related: Jon Rahm on Charlie Woods' potential: 'He's better than I was'

Related: Where does Tiger Woods go from here?

Of course, with this image there is some skepticism as it's not 100 per cent accurate.

Dylan Fritelli, the PGA Tour professional, pointed that out. Another added: "They're gonna go nuts when he wins this thing".

Woods was last seen in public at the 2021 PNC Championship in Orlando when he played in the father/son event with Charlie Woods.

Now he has returned to rehabiliation and it is unlikely we will see Woods play again - if at all - until the 150th Open at St Andrews.

He was tipped by one analyst to retire after this event if he were to make it. Though it's hard to believe he would do this.