This year will mark the first time in 28 years The Players will be without either Tiger Woods or Phil Mickelson. 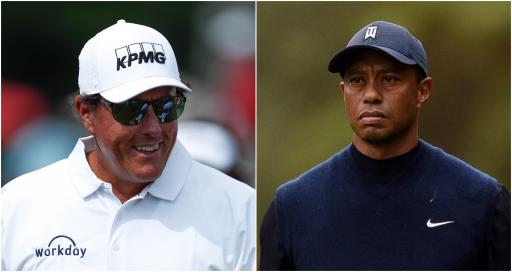 For the first time in 28 years, The Players will be without either Tiger Woods or Phil Mickelson competing.

In perhaps the least surprising golf news of the week, Lefty has not committed to appearing at the Players Championship at TPC Sawgrass but Bryson DeChambeau will.

DeChambeau is expected to finally make his return to the PGA Tour after injuring his wrist and back earlier this season.

The 28-year-old had looked in visible pain at the Farmers Insurance Open off the back of withdrawing from the Saudi International.

DeChambeau only played one round in Jeddah. He also opted to not play the Sony Open, citing wrist injuries.

"I just feel like it's too short a time to get back to playing at 100 per cent capacity," DeChambeau announced before he also pulled out of the Arnold Palmer Invitational.

As the defending champion, it was a shame not to see DeChambeau compete. His memorable drives over water, making minced meat out of the par-5 sixth hole at Bay Hill were an extraordinary sight whatever you made of them.

THE PLAYERS Championship begins next Thursday, March 10, and includes 48 of the top 50 players in the Official World Golf Ranking.

The last player in the field is Taylor Moore (No. 64 in the FedExCup standings through The Honda Classic). pic.twitter.com/tmIUnroLYa

The PGA Tour released the official list of players who will compete at TPC Sawgrass late last night.

Without Mickelson, it will mean that this is the first time since 1994 that we do not see either Woods or Lefty compete at the famous venue.

Mickelson won the Players in 2007 but does not have a top-20 finish in his last 13 starts at TPC Sawgrass.

He has entertained the idea of skipping the event before and has spoken before about not liking the Pete Dye layout.

There has been no word as of yet when Mickelson will return but he could play at The Masters.

Next week will be the first @THEPLAYERSChamp without either Tiger Woods or Phil Mickelson competing since 1994.

The biographer who exposed Mickelson's true feelings about leveraging the Saudis against the PGA Tour predicted we will see him there.

Augusta National is typically an environment where everything is very much controlled in terms of media presence.

He would be able to chill out in the champions' room and would likely get a good reception, he predicted.

Rory McIlroy, who previously criticised Mickelson, called for forgiveness and hoped he would be welcomed back.

The Players field will feature each of the top 25 players in the World Ranking and promises to be the strongest field of the year so far.

Steve Stricker and Harris English join Woods and Mickelson in being eligible to peg it up at the Players but are choosing not to.