It's no wonder golfers have said the 15-time major champion is intimidating... 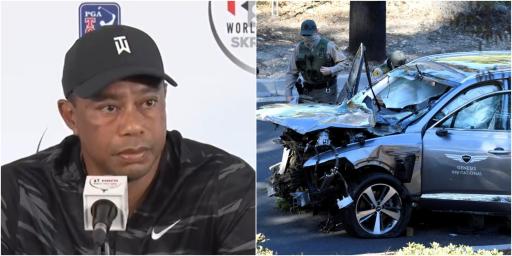 Tiger Woods is known for his intimidating stare but in this clip he causes a golf journalist to forget his question.

The journalist had tried to ask Woods about what he remembers from the car crash but Woods shut it down, wanting to focus on other plans.

Those plans include being able to play golf again one day but to what level he does not yet know.

Woods refused to answer any questions about his car crash which happened in February.

When the answer's so jarring you forget the follow-up. pic.twitter.com/IX7DNdPDHZ

In this clip, the question before was the one about what he remembers from the accident.

Woods did not want to speak about it. It's been answered the police report, he said. Narrator: it has not all been answered.

But it is of course no surprise that Woods did not want to talk about this in public.

The journalist moves on: "How realistic was the amputation?"

"Yeah, it was on the table," Woods said firmly before the reporter continues: "And, my other question is... if...sorry...um I forgot."