Tiger Woods tells Charlie Woods life message: "You will never be my friend"

Tiger Woods reveals more about his relationship with son Charlie Woods on 'Another Golf Podcast'. 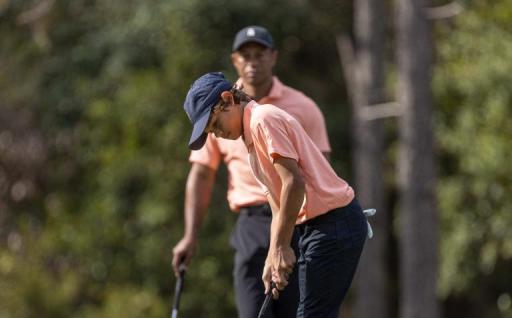 Tiger Woods has revealed the life lesson his father once gave him that he now uses with his 13-year-old son Charlie Woods on the 'Another Golf Podcast' hosted by Adam Rehberg and Emilia Migliaccio.

Woods, who turns 47 on December 30, was speaking on the podcast ahead of competing in The Match with Rory McIlroy on Saturday and next weekend's PNC Championship alongside his young cub Charlie.

Last week, Woods spoke about trying to get inside Charlie's head in order to help him moving forwards on the golf course.

Charlie also revealed how Tiger is a forgetful caddie in their first joint interview.

The 15-time major champion spoke at large about a number of different topics on the Bridgestone Golf-sponsored podcast, but one of the most interesting subjects surrounded his relationship with Charlie.

Woods explained how he will never be his friend, but that he will always be his Dad.

Here's what Woods had to say:

"I told him a long time ago, and this is a life lesson my Dad gave me, and I said 'Son, you will never be my friend, okay, I will always be friendly, but I will always be your Dad. As a Dad, my responsbility is to always give you the advice and the impetus in the enviornment to learn and grow and prosper and as a sounding board, and for you to learn the best decisions of life, especially when I'm not there any more. That's my job.'
"So I said 'don't ever call me your friend, I'm not, I'm your Dad, call me Pops... he calls me other words and that's with me fine too, but I just want him to understand that and I think that's a responsibility as a parent. You can always be friendly, my Dad was always friendly to me, but he was my Dad first."

Woods also spoke of his protection of Charlie in not wanting to create any pressure on a potential future career on the PGA Tour.

He wants Charlie to just enjoy his golf and for the media to stop drawing comparisons.

"Charlie is my partner when we are out there playing but I'm his Dad, so I'm protective of him."
"I obviously want to see him do the best he possibly can, and I want him to learn from everything but protect him from all of this, this environment, especially this day and age, when I grew up there were no camera phones, no videos and stuff, I try to shoe people away and let him enjoy. Let him just play and be a kid.
"When he first played the PNC he was an 11-year-old kid in sixth grade. Now he's in eighth grade but he's still a kid. Let him enjoy it.
"Don't compare him to me, he's not me, he's Charlie, he's going to be his own person, whichever road he goes down. He will go down his own road and create his own path, and that to me as a father is so important for me to provide that environment. Whichever path he goes down, I just want him to be the best at."