Tiger Woods films new Bridgestone Golf content ahead of his tournament duties at this week's Genesis Invitational on the PGA Tour. 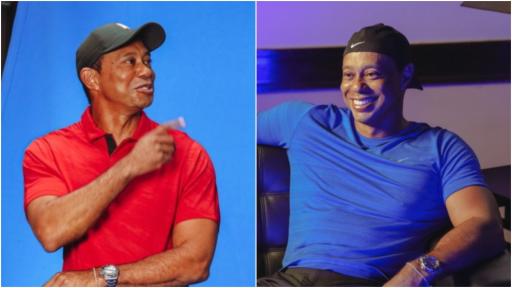 Tiger Woods was spotted filming brand new Bridgestone Golf content over the weekend as speculation mounts over when he will be returning to the PGA Tour.

Woods, 46, was on hand with his golf ball manufacturer to help them film some new advertorial and content around Woods' new TOUR B XS golf ball that he used in his last competitive tournament at the PNC Championship (when finishing second with his son Charlie Woods) in December.

Who do you think Tiger is talking to?

The former World No.1 might not be in action on the PGA Tour at this week's Genesis Invitational but he will be taking up his tournament hosting duties as the event benefits his charity TGR Foundation.

Woods continues to recover from serious leg injuries sustained during his horror car crash in Los Angeles, which happened a day after the Genesis Invitational last year.

Despite Woods not teeing it up at the Genesis Invitational this week, he will no doubt be in the commentary booth calling some of the action over the weekend - just as he did last year albeit looking a little worse for wear.

Woods is aiming to return to the PGA Tour at some point in 2022 but his close friend and former PGA Tour winner John Cook does not believe we will see him in competition again until the same tournament with his son later this December.

RELATED: SCOTTIE SCHEFFLER FINALLY WINS ON THE PGA TOUR, AND HE DOES IT  WEARING TIGER WOODS' GOLF SHOES

When questioned about a potential return date to compete again on the PGA Tour, the 15-time major champion was hesitant.

"No, no, no, no," said Woods when quizzed by the media about being Tour ready.

"I'm not at that level. I can't compete against these guys right now. It's going to take a lot of work to get to where I feel like I can compete with these guys and be at a high level."

NEXT PAGE: IS ANTHONY KIM ABOUT TO MAKE AN INCREDIBLE RETURN TO THE SPORT?!