Cameron Young revealed that he will focus all of his time on the PGA Tour in 2023 as the 'top players' are expected to play in 20 events as part of the new schedule. 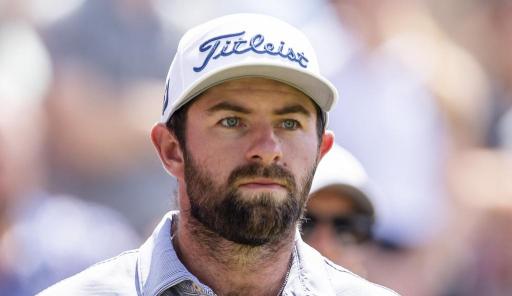 PGA Tour Rookie of the Year Cameron Young revealed that he has virtually no plans to play on the DP World Tour in 2023, earmarking the participation requirements of 'top players' on the PGA Tour as a key reason.

Speaking after the final round of the Hero World Challenge in the Bahamas, Young declined to comment on whether PGA Tour players should make a greater effort to play in Europe.

The five-time Tour runner-up believes his time will be consumed by the 20 events that the best players on the US circuit have committed to, as part of key changes made to the tour's schedule following the emergence of the LIV Golf Series.

"I probably won't play much on the DP World Tour next year, no. I'll play predominantly the PGA Tour. We have to play 21 events, I think, or 20 events, something like that. I won't have time to play elsewhere," Young said at Albany Golf Club.

"Honestly, I have no idea. I know that they have a strong relationship and that it's a nice opportunity to get to play some in Europe. But honestly, I don't know if we should have more guys playing or not."

Back in August at the Tour Championship, Tour commissioner Jay Monahan announced an "unprecedented" commitment by the Tour's best players to compete with each other on a regular basis.

The "top 20" players, meaning the top 20 from the just-announced Player Impact Program results, are the focus of these commitments. Tiger Woods took the top prize for the second year running, this time banking $15m for his troubles.

Young didn't finish in the top 20, but as he would've qualified for a payout under the new 2023 criteria, he was one of three players (him, Hideki Matsuyama and Sam Burns) to earn a bonus $2m paycheque.

Even without confirmation from PIP, Young can certainly consider himself one of the best in the business. He came tied for third at the USPGA Championship, second at The 150th Open and he earned $6,520,598 in his first full season on Tour.

One player, one of Young's Tour colleagues and 2022 Presidents Cup teammates, who offered slightly more encouragement in his comments regarding the DP World Tour was Xander Schauffele.

Schauffele is a two-time winner on the DP World Tour. In 2018, he won the WGC HSBC Champions and earlier this year, he impressively won the Genesis Scottish Open at the Renaissance Club.

Despite Schauffele's willingness to commit to some appearances in Europe, Young's reluctance foreshadows some doubts that have previously been expressed by golf fans over the strategic alliance between the PGA and DP World Tours.

The new arrangement on the PGA Tour has confused players such as Jon Rahm and Viktor Hovland who will be hoping an exception can be made for European players who must fulfil playing obligations to qualify for Team Europe at the Ryder Cup.

While also filling out their playing quota in Europe, players like Rahm and Hovland could be required to play up to 28 times in 2023, if we include the major championships too.

This is an example where you could argue the DP World Tour and its members could have been overlooked when compared with the less strenuous duties that have been placed upon American players.

This way, more of the world's best players would play in Europe, European players would find it easier to fulfil their commitments and it would also show part of the alliance which gives back to the DP World Tour.

Back in June, the strategic alliance was extended to 2035 with the PGA Tour increasing its stake to 40% in European Tour Productions. The top 10 players in the DP World Tour Race to Dubai in 2024 will earn Tour cards for the US circuit.

As much as this increases the playing opportunities for European players in America, you could argue that the best players from the DP World Tour will be fed to the PGA Tour. A lot of take and not much give perhaps from Monahan's organisation.