The 23-year-old is trying to win for the fifth time on the LPGA Tour at the CME Group Tour Championship. 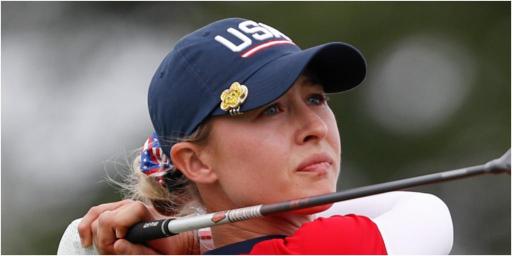 Nelly Korda does not want for too much in her golf game right now. She's the world number one, has won four times on the LPGA Tour this season and is an Olympic gold medalist to boot. But she's just made a big change: she's got a new coach.

That's right, the 23-year-old has followed in Rory McIlroy's example by taking decisive action. The youngest Korda sister has brought in Jamie Mulligan, as reported by the Associated Press.

Korda brought in Mulligan - who has previously worked with Patrick Cantlay - at the recommendation of her sister. It has already proved to be a good partnership as she won the Pelican's Women Championship last week.

That victory did not come easy to Korda, who almost threw away the win when she signed for a triple bogey on the par-4 17th having tugged her wedge approach. She chunked her greenside chip into the bunker and then duly three-stabbed.

It wasn't to be. She looked defeated. Until she wasn't. A birdie at 18 in regulation saw her get herself into a four-way playoff before making an almost identical birdie to win as Lexi Thompson succumbed to some putting woes.

"I've kind of surfed around," said Korda on her search for coaches. "I though about a couple of coaches here and there, and I liked (Mulligan's) demeanour, I like the way he's super positive. I think we've just clicked kind of since the first day and I really enjoy being around him."

Christina Kim's reaction to playing with Nelly Korda for the first time is, well, amazing. pic.twitter.com/xn42a1xrUL

She continued: "I definitely do know my golf swing. I've kind of gotten really obsessed with it in the past couple of years. I think it's very important since you're kind of by yourself week in and week out to be your own coach in a sense and kind of know some stuff about it.

"But I think it's super important also to have the guidance and to have someone to lean on."

Korda is the hot favourite now to win the LPGA Tour player of the year ahead of Jin Young Ko, who has also been on a tear in recent months shooting 14 consecutive rounds in the 60s to tie Annika Sorenstam's record she set in the 1990s. Korda, reportedly, will still use her short game coach David Whelan.