Jack Nicklaus and Gary Player were just a couple of figures from the world of sport to pay tribute to the late, great Lee Elder. 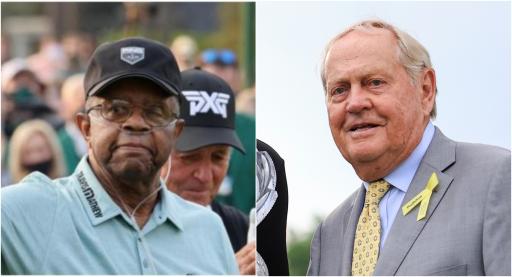 The world of golf was saddened yesterday when news filtered through that Lee Elder had died at the age of 87.

Elder became the first black golfer to play at The Masters in 1975. He had 16 professional wins in his career and four of them came on the PGA Tour.

In April, Elder took part in the opening ceremony of The Masters alongside Jack Nicklaus and Gary Player, which was a very significant and touching morning in the history of the event. Both players paid tribute to Elder on social media.

Tributes to the legendary figure of golf have poured in, which just shows how great a player Elder was and how his presence on the PGA Tour provided inspiration for African-Americans.

RELATED: TIGER WOODS CONFIRMS HE WILL NOT RETURN TO PGA TOUR IN FULL-TIME CAPACITY

Nicklaus, who won The Masters six times, described Elder as a pioneer: "Lee Elder was a pioneer in so many ways. Yes, he was the first black golfer to play in @TheMasters, but that simply underlined the hard work Lee put in to further the cause of everyone who has a dream to play on the @PGATOUR  and thinks there were too many barriers before them.

Lee Elder was a pioneer in so many ways. Yes, he was the first black golfer to play in @TheMasters, but that simply underlined the hard work Lee put in to further the cause of everyone who has a dream to play on the @PGATOUR and thinks there were too many barriers before them.

Two-time winner at Augusta Bubba Watson took to social media and said Elder's legacy will live on forever. Harold Varner III said that Elder made history because of his talent as well as because he was an African-American.

After Tiger Woods won his first Masters title in 1997, he paid tribute to Elder: "Lee Elder meant a lot to me because he was the first. He was the one that I looked up to. And because of what he did, I was able to play here, which was my dream."

Figures from outside of the world of golf also had kind words for Elder, who very much touched the hearts of a lot of people in America.

Take a look below at the heartfelt messages for Lee Elder who died at the age of 87.

Look out for the ones coming behind you. Lee Elder was an incredible contribution to the game and made history because of his talent, not just because he was African-American. I’m fortunate to have had the chance to learn from him. My prayers to the Elder family at this time. pic.twitter.com/FBPtzdmkro

Lee Elder exuded dignity and strength. He was a gentleman and a legend. I am grateful that I could watch him participate in the ceremonial tee shot with Gary Player and Jack Nickalus at last year's Masters. Rest in peace, Lee Elder.

It was an honor to know Lee Elder. He inspired so many in life & in golf… his legacy will live on forever. Rest in peace https://t.co/NetifQYCYh

I would like to send my deepest sympathies to Lee Elder's wife and family at this difficult time. Lee was truly a titan in the world of golf and a great contributor to society. He overcame a tremendous number of obstacles throughout his life, yet always remained gracious. (1/2) pic.twitter.com/AJZZETv1XO

In 1975, Lee Elder became the first Black golfer to compete in the Masters Tournament.

He broke other color barriers as well.

A trailblazer, an athlete, and a true gentleman.

May he Rest In Peace as his legacy lives on. https://t.co/jScCHdgyQp

NEXT PAGE: LEGENDARY GOLFER LEE ELDER, WHO MADE HISTORY AT THE 1975 MASTERS, DIES AGED 87