Viktor Hovland revealed the new putting technique which helped him to defend his title at the Hero World Challenge at Albany Golf Club. 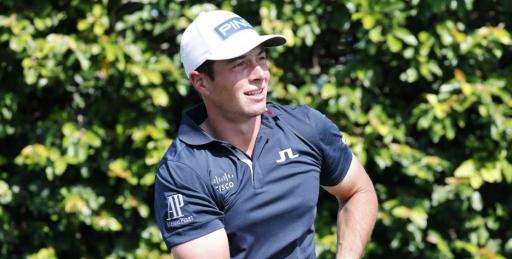 Viktor Hovland has an apparent affinity with Albany Golf Club. On Sunday, he became the first player to defend his title at the Hero World Challenge since tournament host Tiger Woods in 2007.

Just as in 2021, Hovland finished ahead of Scottie Scheffler back in second place. The young Norwegian carded a final-round 69 to seal the deal by two shots before posing for a picture with the trophy and Woods himself.

After the final round, Hovland revealed that his putting recently underwent a significant shift in technique. He works with Jeff Smith, the Director of Instruction at Eagle Springs GC in Colorado and a Top 100 instructor. They teamed up back in 2020.

Hovland claims he was misreading 15-foot putts by two feet at Karsten Creek, just outside of Stillwater, Oklahoma where he lives. A concerning image considering he is a three-time PGA Tour winner and World No. 9.

Smith introduced AimPoint putting to him, the putting routine that has become popular in the amateur and professional games. Hovland felt inspired once Smith instilled this technique into his arsenal and he was able to end his year in perfect fashion.

Nothing quite like watching golf with dad on Sunday pic.twitter.com/bbqLrHbnEH

"He (Smith) had some experience with AimPoint, so he basically said, OK, you need to really learn this. So the rest of the nine holes he just basically read the greens for me, told me where to aim and I just started making everything," Hovland said.
"So that really kind of clicked in my head that, OK, I really need to master this. Obviously, it's not a perfect system, I'm not going to make every single putt, but it gives me a framework to where I can trust that read and most of the time it's going to be fairly close.
"So what I do every single - what you saw on the practice green, I just kind of get some tees up, hit short putts, get the level out just to make sure that my feet of calibrated, yeah, and then ready to go."

AimPoint requires you to stand in front of your putt and hold up the number of fingers corresponding to the degree of slope your putt has. Your pointer finger should be centred on the hole and your other fingers on the high side of your line. The edge of your outside finger is supposedly the AimPoint.

As Hovland says, this method doesn't guarantee a perfect quick fix to your short game. Weather conditions and the speed of the green are other variables which you still need to calculate in your mind too.

Other players such as Dustin Johnson, Adam Scott, Justin Rose, Stacey Lewis and Lydia Ko have also used AimPoint. There is method to the madness and this showed with another strong display in December from Hovland.