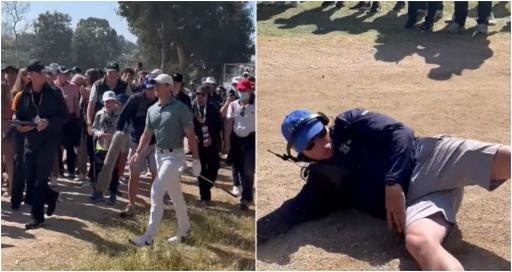 This boom stick operator took a tumble trying to keep up with Rory McIlroy at Tiger Woods' Genesis Invitational on the PGA Tour.

McIlroy was making his way to the next tee box when out of nowhere you can see the poor soul head straight to the deck.

It really did look like a heavy fall and he brushed it off quickly. He just looked a bit flustered as he got to his feet and carried on.

The culprit? A metal object stuck in the floor, pointed out by one of the fans in attendance who was clutching a can of beer.

Related: Is the SGL dead and buried before it even started?

McIlroy did not win the Genesis Invitational. Joaquin Niemann claimed his second PGA Tour victory with a wire-to-wire win.

McIlroy reflected positively on his performance.

"I actually had a really good week by the way," he told the media afterwards.

"My game's close, it's close. I certainly didn't do enough to shot 21-under par this week and keep up with Joaco, but I'm happy with my week."

He added: "I always sort of thought Riv is a place where you shoot four 68s and you're going to be in with a good chance.

"I've never seen the greens this good at Riv and it looks like guys are just -- I've never held as many putts here as I have this week, so guys seem to be holing a lot more putts just because they're not soft, there's not heel prints, there's none of that and they're rolling true."