As Bryson DeChambeau & DJ distance themselves, is the SGL already over?

Bryson DeChambeau and Dustin Johnson have released statements over their PGA Tour futures in the wake of Phil Mickelson's comments. But is the concept over before it began? 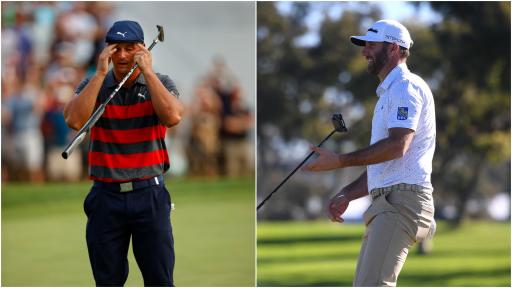 Bryson DeChambeau has pledged to stay on the PGA Tour "as of now" and has been joined by Dustin Johnson.

The star duo both released statements over the weekend. The vibe from DeChambeau's seemed to suggest that he would only jump ship if he was joined. He appears to be waiting. Johnson, on the other hand, had a statement released on his behalf.

That statement was from the PGA Tour's official communications department. Apparently, DJ is grateful for their leadership and many sponsors after saying he was fully committed to the PGA Tour. "I feel now is time to put such speculation to rest," he said.

That sounds very much like it was from the horse's mouth.

This week was no doubt a blow for the Saudi Golf League, or in Rory McIlroy's words "dead in the water". He joked that Greg Norman himself would have to peg it up again as he questioned whether they even had enough players now.

But is the idea dead? It does seem tough to believe given they have come this far and ploughed this much money into the concept under the umbrella of the Asian Tour not to be totally derailed.

They've poached a lawyer from England's Football Association. Mickelson allegedly had hired attorneys to draw up the stipulations for the league. They've come too far and have too much money to simply abandon it.

The concept - at least in my mind - has been proven for them to work. They already had the star names compete at the Saudi International much to the annoyance and reluctance of the PGA Tour.

Phil Mickelson's ludicrous comments - of saying the quiet part loud - will almost certainly have a devastating impact in the short term but the Saudis' bankroll is endless. Long term? There is still a route for an alternative league.

Therefore, it is probably too soon to suggest the idea is dead and buried before it even got off the ground. There is an appetite there. To all intents and purposes, it looked very much like they had that big, young name to really show they mean business.

They've canned this idea before, regrouped and come again. No doubt they will probably do the same in the future. Mickelson's comments should not be forgotten but people have short memories. The furore will dissipate over time.

It would not at all be surprising now to see the Asian Tour get a much larger investment. Either that, or they pause the idea for the SGL and offer a more appealing idea with a lap dog who doesn't incinerate their credibility on the verge of something big in the future.

There has no doubt been a shift. The elite PGA Tour players appear more resilient than ever in their allegiance to the PGA Tour.

A shift that was in no doubt down to a lack of answers for some. Collin Morikawa, although he confirmed he was staying, seemed to suggest he was only doing so because there was a frustration over a lack of answers.

Not just a shoot-out every other week.

"It was just very surprising and disappointing, sad," McIlroy said of Mickelson's comments to the biographer Alan Shipnuck.

"I'm sure he's sitting at home sort of rethinking his position and where he goes from here."