Korn Ferry Tour pro had to take a chilly dip after he hit his shoe into the water during the BMW Charity Pro-Am at Thornblade Club. 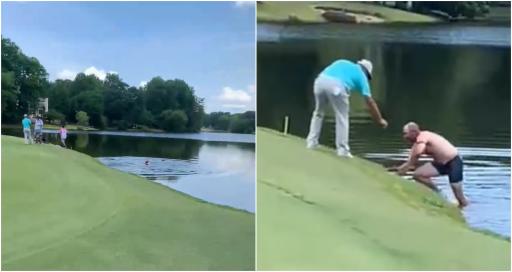 The details at this minute are a little bit hazy, but the footage of this Korn Ferry Tour pro is clear.

Pro Josh Teater was playing the BWM Charity Pro-Am at Thornblade Club in South Carolina this week when all of this transpired.

He was reportedly playing his third shot on the par-4, 410-yard seventh hole when he decided to take his shoe off to hit. Just why he did that, we are not sure.

Teater struck his third shot straight into the water. And for some reason decided to strike his shoe, which also flew into the water. That meant he had to take a chilly deep.

Teater wrote on social media that he "flew the green into water" then "hit shoe into water". "Had to get it," he added.

Former PGA Tour pro Kyle Thompson managed to film some of it and shared the 17-second clip on Twitter. Watch below as Teater returns to the green after going fully sumberged under water.

Leaked video: This may or may not be ⁦@jteater12⁩ today during the ⁦@BMWCharityProAm⁩. Sources are trying to confirm. pic.twitter.com/h32dwP6h7I

Hilariously, a man can be overheard shouting: "Could you keep it down back there, we're trying to play!"

A playing partner offers Teater some help before his caddie passes him a towel.

Teater reportedly escaped the hole with just a double bogey.

Thompson himself is known as a bit of a joker. Just this year he detailed how an unsuspecting member of the public challenged him to a game of Topgolf.

Little did that person know that Thompson was a former pro who can actually hit a target. That person was well and truly hustled.