PGA Tour star Max Homa is now fully behind using the AimPoint method when he is putting. 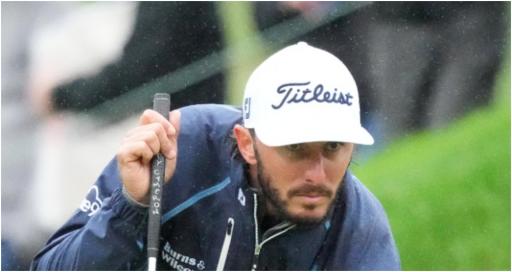 Homa, a three-time winner now, found himelf in contention heading into the final round at the Wells Fargo Championship and was only two strokes off leader Keegan Bradley with 18 holes left to play.

The 31-year-old battled the elements all day on Saturday to card a 1-over par 71 at TPC Potomac after firing earlier rounds of 67-66.

And a rain-soaked Homa confirmed he is now working with Kenyon. The duo started working together at the Masters.

Homa is now fully behind the AimPoint method on the short stuff because he believes that his green-reading is not where it needs to be.

At the Zurich Classic of New Orleans a few weeks ago, Homa found out that his green-reading was some way off.

Of AimPoint, Homa said: "It's been awesome. I always struggled holing putts between 10 and 15 and 20 feet.

"[It has] always been pretty good inside of eight [feet]. Yeah, like Joe [caddie] said today, every putt I've hit looks like it's got a chance, which is fun.

"Just the little things I feel like I'm making -- even on the first hole today, obviously a little nervous on one, hit two great shots, a good chip and still had 10, 12 feet and I still felt very confident in the read.

"So little things like that are really helping me."

For those not in the know, AimPoint is method of reading the break of the putt using a three-step system designed to help you read every putt accurately.

More than 200 PGA Tour pros use the method and even the 54-hole leader at Wells Fargo, Keegan Bradley, is a fan of the system.

Though in the past he has drawn criticism for shall we say...being rather deliberate with his pace of play.

"Yeah, Phil showed me in New Orleans, I would read them and he would ask me where I thought I needed to start it and then he would show me where I did and I was quite a ways off," Homa added.

"So [I have] been practicing a ton with my feet, making sure that I'm doing the best I can.

"Obviously it's still new, I wouldn't say I've mastered it by any means, but just getting a little bit better every day at home really grinding, making sure I'm practicing the percentages and little things like that.

"So Phil and my coach Mark, I was at his place this past weekend, we went through it all, too.

"It was pretty obvious when I saw how poorly I was reading greens at least in New Orleans [at the Zurich Classic]."