Tyrrell Hatton puts Augusta National on blast: "Not a fair test at times"

Tyrrell Hatton was brutally honest about his experience at The Masters and admitted: "I'm glad it's over." 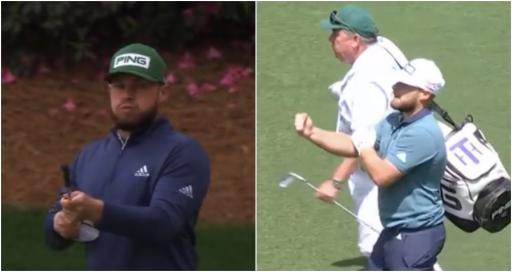 It is fair to say England's Tyrrell Hatton did not fully enjoy his time at Augusta National. In fact, he called the course that hosts The Masters an "unfair test at times".

By the time Hatton walked off the 18th green on Sunday afternoon, his score had crept up to 17-over par. Over the course of the week, Hatton, 30, had recorded 15 bogeys, five double bogeys and one triple. He also had eight birdies and one eagle.

He finished dead last of the players that made the cut and five strokes worse than Tiger Woods, who started the week with a slight limp but by the time he walked off the 18th green to a standing ovation it was very much pronounced.

Hatton told the media: "I'm glad it's over. I think that's a pretty good way to sum it up. Obviously, disappointed, but I just never do well here.

"This course doesn't really suit my eye, to be honest, so, yeah, it's just one of those weeks that I feel like if I come back in the future, it's just a case of trying to get through the best that I can. Not much."

Hatton was coming into the 2022 Masters off the back of his best finish at Augusta. He finished in a tie for 18th and even signed for a Sunday 68.

He said: "Yeah, but you can hit good shots here and not get any reward for it. It's unfair at times. I don't agree with that.

"If you hit a good shot, you should end up near the hole. Not then short-sided into a bunker because of the slopes that they've created and stuff. Yeah, I don't think it's a fair test at times, and when you hit good shots and you're not rewarded for it, it shows."

He continued: "I think it's how the course is set up in general. You don't really have to miss a shot, and your next one you'll have -- you're really struggling to make par.

"With how it runs off the greens here and the slopes that you are then chipping into and how obviously it's cut, it just makes it really hard to even get chip shots close. I think everything is exaggerated here."

Hatton was playing his final round with Billy Horschel. Both appeared to be getting frustrated out there. At one point during the week Hatton was spotted using his putter as a pretend gun. He was also snapped giving a rather interesting hand gesture.

Did Hatton feel like he kept his temper alright?

"When you are clearly bottom of the field during the weekend, even if I feel like I've hit good shots out there, I've not been rewarded for them, so it's a case of just lose a bit of interest," he continued.

"Certainly with the scores I had going, I'm kind of just -- it's not even trying to build on anything for next week.

"I'm just trying to ideally get off the golf course as fast as possible."

Hatton at one point had to be his own caddie while his caddie Mick was raking the fairway bunker.

He said his looper was struggling with a knee injury so it was more about pace of play and he's got a replacement sorted his next event.

"Would be nice if we had a time machine to fast forward certain things," he joked.

When Horschel faced the media a short time later, he spoke highly of Hatton.

He said: "I love Tyrrell. Tyrrell is great. He gets upset, but he is over it. He doesn't carry on. He is over it right after he does it, and it's over. You can talk to him five seconds after he got pissed at something, and he is fine.

"There's guys out here that mope and pout and carry themselves when they hit a bad shot, and they just are -- they're not fun to play with. I don't mind if someone gets angry, but just don't pout and mope around."

Full marks for honesty Tyrrell. Here's to hoping things can go better the next time you play The Masters.

More stories about the 2022 Masters by GolfMagic