CBS viewers were absolutely furious with Sir Nick Faldo after he fudged Rory McIlroy's epic finish to The Masters. 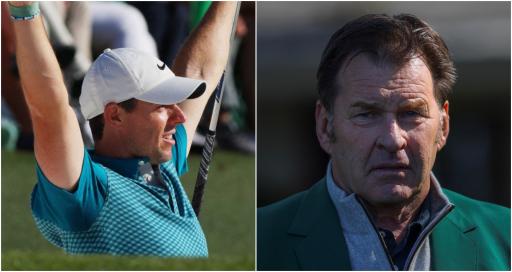 Golf fans were quick to put Sir Nick Faldo on full blast after he spoiled Rory McIlroy's insane finish at The Masters.

The Northern Irishman went on an absolute tear on Sunday at Augusta and his fans were dreaming of a late charge for the green jacket.

He would have needed Scottie Scheffler to faulter on the back nine but that didn't stop McIlroy, 32, putting up the number to beat.

By the time McIlroy had reached Amen Corner he was 5-under for his round. He departed the tricky stretch with his score at 6-under.

If he were to somehow, just maybe, post a score like 9-under then could that really turn up the heat on Scheffler?

McIlroy made par at the tough 14th and then frustratingly for him did not take advantage of his last par-5 at 15.

He made par again at 16 and 17, then sent his drive on 18 into the fairway bunker. He was in the greenside trap playing his third.

But he has played that bunker shot many times before in practice and judged it perfectly. Cue scenes. McIlroy did not know how to celebrate.

"Something amazing has just happened," Faldo quips on the broadcast as it was showing Cameron Smith's putt at 13.

"I don't want to spoil it," he adds. Er, right, so what could it possibly be? Just a horrible call by Sir Nick, we are sorry to say. A complete fudge.

"Anything is possible," Jim Nantz adds as the ball trickles towards the hole. "Anything's possible!" he yells as it goes in.

Worst moment: CBS Sports Nick Faldo, after seeing Rory McIlroy’s incredible birdie on the 18th, “Something amazing just happened. I don’t want to spoil it.” Nantz quips, “I know what it is.” CBS stays with Smith’s putt and then show Rory on tape delay with no set up.

Any word if Nick Faldo is retiring after this broadcast #themasters

#NickFaldo is not good on the #CBS golf broadcasts. They need to find someone else to put in the booth. It doesn’t need to be an ex-PGA golfer

More stories about the 2022 Masters by GolfMagic