John Daly was booted out of the Regions Tradition on the PGA Tour Champions for breaking a golden rule in golf. 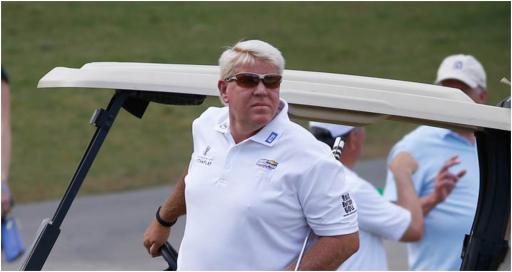 John Daly is known for his unique and easy-going approach to the game. For decades, he's been a huge draw for golf fans.

Though this was not really what you expect from the big man. Over the weekend, Daly, 56, was disqualified from the Regions Tradition.

The reason why he was booted out of the first major of the men's senior circuit at TPC Sugarloaf is that he forgot to sign his scorecard.

That's a schoolboy error from the big-hitting American right there. He was only 36 holes into the tournament.

Daly does not have social media and didn't talk to the press on the whole debacle. He wasn't the only player to be DQ'd over the weekend.

In the very same tournament, German Alex Cejka, 51, was also given his marching orders after using a non-conforming green-reading book.

It was a bitter pill for Cejka to swallow, too, as he was the defending champion of the tournament.

In 2019, Cejka was also disqualified from the Honda Classic for doing something similar.

That time, his playing partner Cameron Tringale spotted that he was using a green-reading book that was too large.

Although it has to be said on both occasions, the rulings had very recently changed. Cejka just needs to read the fine print in future.

If we're being honest to Daly, he is the type of character that might no really care a great deal.

He will admit that he has not had the greatest season so far on the PGA Tour Champions.

It's not immediately clear the precise details of what actually happened. If you look at shot tracker, you can see that he four-putts his final hole.

This is actually the first time he has been disqualified from a PGA Tour Champions event in 102 starts.

During his PGA Tour career, he was disqualified five times. He is in the field for this week's PGA Championship at Southern Hills.

Here's to hoping he remembers one of golf's golden rules.