Viktor Hovland made the third hole-in-one of his PGA Tour career at the BMW Championship at Wilmington Country Club in Delaware. 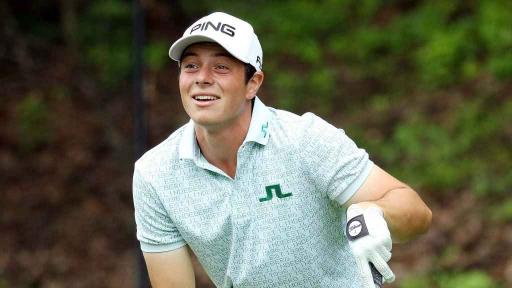 Viktor Hovland has made two holes-in-one on the PGA Tour this season and there is no doubt which one has meant the most.

Hovland, 24, was playing in the final round of the BMW Championship during the second leg of the FedEx Cup Playoffs when he drained one at the second hole.

The young superstar previously made an ace during the third round of The Players at TPC Sawgrass on the eighth hole.

At Wilmington Country Club in Delaware on Sunday, his ace (the third in his PGA Tour career) didn't really do too much for his round, but it sent one lucky student to college on a full scholarship.

That is because the BMW Championship, which was successfully defended by Patrick Cantlay, benefits the Evans Scholars Foundation.

As part of the tournament, BMW sponsored a four-year, $125,000 scholarship for an aspiring student in a player's name if they made a hole-in-one.

Hovland was absolutely delighted that his ace was going to affect real change in a young person's life.

Hovland later told the media that it was a perfect 6-iron and a "nice start to the day."

When told of the consequence of his ace, he said: "That's incredible. The hole-in-one obviously was nice for me, and while it didn't move me up the leaderboard that much, for it to actually mean something is really cool. I hope that goes a long way."

After the 150th Open where he finished T-4, he went home to Norway where he was filmed playing golf in some absolutely wild conditions.

Despite finishing outside the top-30 in Delaware, Hovland has already assured himself a starting berth in the Tour Championship at East Lake thanks to wins at the Hero World Challenge and World Wide Technology Championship at Mayakoba.

Hovland also had top-5 finishes at the Genesis Invitational and Arnold Palmer Invitational. He finished T-9 at The Players.

Next page: Billy Horschel with the funniest temper tantrum at BMW Championship!