Will Zalatoris FORCED OUT of Tiger Woods' Hero World Challenge

Former PGA Tour Rookie of the Year Will Zalatoris has been forced to withdraw from Tiger Woods' Hero World Challenge in the Bahamas. 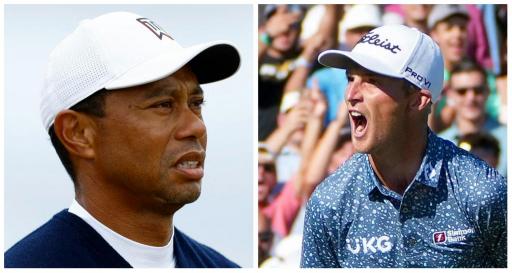 Will Zalatoris has been forced to withdraw from Tiger Woods' forthcoming Hero World Challenge.

It appears that a back injury Zalatoris sustained during the second leg of last season's FedEx Cup Playoffs appears to still be causing the young American discomfort.

Zalatoris, who was previously a PGA Tour Rookie of The Year, withdrew during the third round of the BMW Championship.

An MRI scan later confirmed the 26-year-old Texan had two herniated disks, forcing him to also miss the Tour Championship at East Lake and his chance at the $18m jackpot.

Rory McIlroy subsequently won that tournament and flexed about that victory this week.

Zalatoris would have also been bitterly disappointed to have missed out on the 2022 Presidents Cup at Quail Hollow Club.

He was, however, still on site and gave the American side his full support.

Hero World Challenge field update: @WillZalatoris not quite ready to tee it up. We’ll miss Will this year but hope he’ll be back to Albany soon. @ShaneLowryGolf is IN.

Zalatoris has been replaced in the field at Tiger's Hero World Challenge by Shane Lowry. The tournament takes place from November 28 to 4 December.

Woods hosts the tournament every year in Albany, Bahamas. It was the scene last year where Woods was filmed hitting golf balls on the range wearing his Sunday red for the very first time following his car crash.

The 82-time PGA Tour winner has not named himself as a participant yet, but there are still three spaces open which has fuelled speculation that he may yet peg it up.

This is the current field:

In total, 16 of the 17 confirmed players in the field are all Tour winners, with just Cameron Young, who won PGA Tour Rookie of the Year last season, as the only player yet without a win on the circuit.

Viktor Hovland is back to defend his title, which he won by one shot over Scottie Scheffler last year.

It is not known when Zalatoris will return from injury, but he will still be expecting big things in 2022-2023.

Related: Zalatoris opens up on "rough" decision to sack caddie

He captured his very first PGA Tour victory at the FedEx St. Jude Championship at TPC Southwind last season before hurting his back in the very next event.

Zalatoris was also unfortunate not have won a major championship as he finished second twice.

England's Matthew Fitzpatrick pipped him at the U.S. Open at The Country Club at Brookline and he was defeated in a three-hole playoff by Justin Thomas at the PGA Championship at Southern Hills.

Next page: Tiger Woods' golf ball from 1996 ace up for sale