Struggle with short putts? Do not watch Will Zalatoris...

Will Zalatoris shot a superb 66 on day one of the PGA Championship, however, his uneasy putting stroke was on show again. 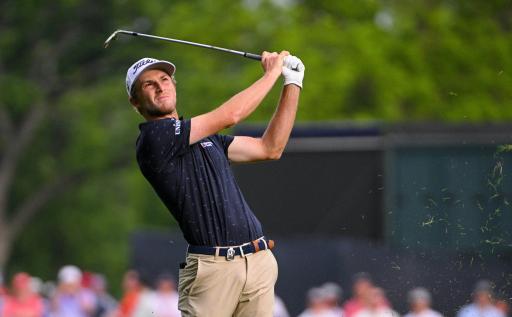 Since breaking through on the PGA Tour, Will Zalatoris has found his best game at major championships and he has done so again at Southern Hills.

The 25-year-old only joined the tour as a Special Temporary Member in 2021 and he has already recorded two top-10 finishes at The Masters. He also came tied eighth and five shots behind Phil Mickelson at last year's US PGA.

On Thursday, Zalatoris was solid again. He shot 4-under-par to sit one shot behind Rory McIlroy on a day that saw players such as Brooks Koepka and Patrick Cantlay struggle.

"It's super fun whenever you have days like that. I think I either made four or five 25-footers. It was kind of a bizarre day," said Zalatoris after his round in Tulsa.

"I didn't drive it great early and then drove it nicely at the end, but I think all six of my birdies came from the rough today, which is just very bizarre."

Related: "What is he thinking?!" Tyrrell Hatton dents green at PGA Championship

I know it went in but my god this should come with a warning before showing. @NoLayingUp pic.twitter.com/ePe6V6uZ0G

"I'm very pleased with today, obviously. Anytime you can put up a 66 in a major, you're obviously happy."

He may have been happy to make a number of long putts, however, he still remains shakey over short putts. One putt, in particular, made golf fans feel very uneasy.

As you can see in the footage above, Zalatoris hesitates and almost makes two separate strokes as he eventually tapped it into the hole. It is difficult to watch the 2021 Rookie of the Year face four-footers.

His shaky approach to putting shows in his statistics. He is ranked 185th in strokes gained in putting on the PGA Tour and it is a clear weakness of his game.

Next Page: ESPN announcers stunned by Tiger Woods' sandwich during US PGA