Justin Thomas tells Will Zalatoris' mentor to "show some class"

PGA Tour pro Justin Thomas picked up on comments made by Will Zalatoris' mentor Scott Fawcett after he claimed the FedEx St. Jude Championship. 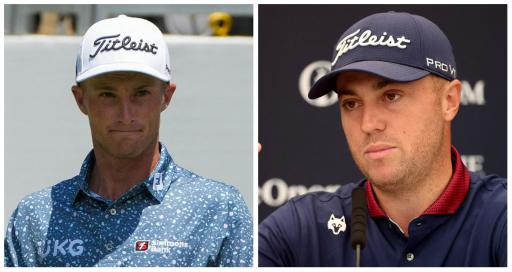 Just like Max Homa, he's usually there in the comments to post a dry and witty remark, never taking himself too seriously.

One thing with social media is that although posts can be deleted, they are rarely forgotten. Screen grabs can often come back to bite you, too.

Related: Will Zalatoris on his emotional outburst - "I can't believe I said that..."

Over the weekend, Thomas was likely thrilled to bits to see another PGA Tour loyalist, Will Zalatoris, claim his maiden victory TPC Southwind.

It included him contemplating playing an almightily difficult shot before he was convinced by his new caddie to go to the drop zone.

Moments later he was a PGA Tour winner. As you can imagine, his camp would have been simply over the moon.

One member of his team is Scott Fawcett, who is the 25-year-old's mentor. Fawcett picked up on some comments during NBC's broadcast.

Zalatoris, if you weren't aware, has had his fair share of social media trolls over his putting stroke.

He later admitted that it was his haters and NBA player Steph Curry who inspired his emotional reaction after draining a huge putt at the 72nd hole.

Fawcett's foul-mouthed comments included him telling Hicks to "f*** off". He added in the post: "Zalatoris has the best speed control on tour so he f***ing earned it you d***."

They were swiftly deleted but Thomas picked up on them.

Hey Scott. Twitter saw your incredibly egregious and aggressive tweets. Congrats on your “win” but show some class and respect if you are as professional as you claim to be. Giving other coaches and those involved in golf a really bad look. Nobody likes a sore winner pic.twitter.com/AHeb0eldds

Nice to hop on the bully train without the entire background...love it! I can assure you Brad has his hand in this...have a day, JT.

Haha Scott I had another player on Tour send me it. Fax and I do not text. Had nothing to do with it. Enjoy your victory

Fair enough...I can't get out of my echo chamber to realize they were all mad I said what I said...and, as you know, I didn't win anything. I'm just here doing what I do. ;)

Thanks @JustinThomas34 not sure how this is good for anybody. If Scott has helped @WillZalatoris , he will let everyone know https://t.co/euGvMuwr4d

Interestingly, Fawcett later claimed that Thomas, 29, had been asked by Faxon to get involved.

"Fax and I do not text," Thomas wrote, before claiming another Tour player directed him to the posts.

Zalatoris has worked with Fawcett for quite a long time. He has previously spoken favourably about his impact.

Despite saying that he and Goble remain good friends, Zalatoris later admitted it was time for them to part ways.

Next page: Tiger headed to BMW Championship to fend off LIV