Xander Schauffele was one of the first players this week to attend a press conference and talk about this week's Saudi International. 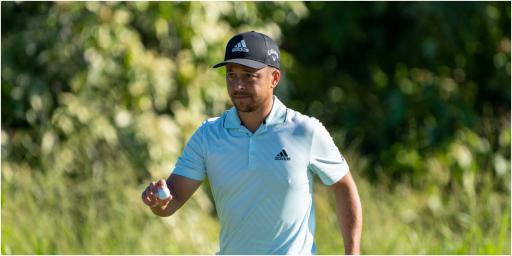 Xander Schauffele was one of the first players taking part in this week's Saudi International to field questions from the media.

And judging by this question perhaps it was from Mohammad bin Salman himself, the crown prince of the Kingdom.

The topic of course was golf in the region and what they have done to promote golf and ultimately "grow the game".

It has obviously been well documented about their human rights abuses and that this tournament is seen by many as sportswashing.

In my opinion this week is all about money. Nothing more and nothing less. One tour is paying a lot more than the other this week.

The question Schauffele fielded was perhaps so absurd it would be laughable were it not for the real issues involved.

Related: Jason Kokrak admits cash is king as he heads to Saudi Arabia

First let's take a look at the question:

Q. Obviously Golf Saudi and the Saudi Golf Federation have been growing the game and doing a great job in doing that. How important is that for you coming here and participating in such tournaments, growing the game in different markets, and what is your message to the young people who are taking up golf?

XANDER SCHAUFFELE: Yeah, I think it's awesome that the Kingdom of Saudi Arabia has sort of gone that direction. It's a big stance with the women's tournament coming through and younger generations trying to play golf here, as well. I try to help local kids in my town back home. If I can come out here and inspire some kids to play golf, as well, that's a cherry on top for me.

Of course, you cannot really expect any other response from Schauffele, 28, who also admitted in the press conference that on his sixth year on tour he now feels "a little old".

Schauffele also spoke about his heritage and was also questioned about the negativity surrounding the Asian Tour. That is because Greg Norman, the CEO of LIV Golf Investments, has set up a 10-event series under the umbrella of that circuit.

After that, it's widely anticipated that Normal et al want to set up a rival golf league. Ian Poulter has reportedly been offered millions to ditch his allegiances to the European (now DP World Tour).

Norman unveiled the plans for 2022 at a press conference yesterday and launched an extraordinary defence of the tour, lashing out at the negativity and claimed he wants to work in partnership with other tours. "What are you scared of?" he asked.

This is what Schauffele was asked:

Q. Given your heritage, the Asian part of it, the German part of it, living in America and also given the fact that you are the Olympic champion which comes with a lot of responsibility whether you sign up for it or not, are you surprised that there's been so much negativity with the Asian Tour lately, things like getting release for the tournament and things like that? You are in a very specific situation apart from the other players. You are in this situation because of the Heritage and all. Can you talk about that?

XANDER SCHAUFFELE: Yeah, I consider myself a global player. I'm the son of two immigrants. Very confused upbringing, half French, half German father; Taiwanese, grew-up-in-Japan mother, and I was born in the U.S., and my brother was born in Germany. Very, very international background. I always consider myself a global player and my dad and I always talked about how he wanted me to play around the world. These are opportunities for me to do that, so I'm sticking to my guns.

I'm not really a surprise I would say that there's been negative talk around coming here to the Asian Tour. There's so many things going on, a lot of distractions this week with sort of all the talks with the two tours and whatnot. I'm just trying to keep my head down and handle business as I always do.