"You're an ass!" Tiger Woods to Rory McIlroy ahead of The Match

Tiger Woods talks about his close bond with Rory McIlroy: "I'm going to be the biggest cheerleader he's ever seen." 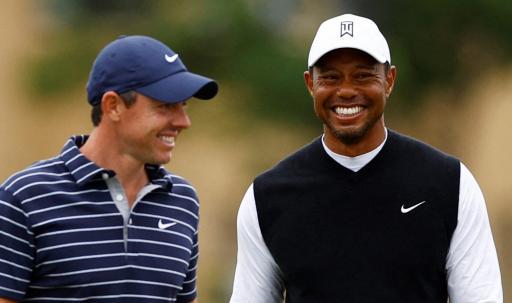 Tiger Woods says he will be acting as the "biggest cheerleader" Rory McIlroy has ever seen when he joins the World No.1 for their mouth-watering clash against Jordan Spieth and Justin Thomas in The Match on Saturday night.

Woods, who turns 47 on December 30, was speaking on the 'Another Golf Podcast' hosted by Adam Rehberg and Emilia Migliaccio.

Woods spoke openly about his relationship with McIlroy, and how it has become even stronger in recent months as a result of the emergence of LIV Golf.

The 15-time major champion explained how he speaks to McIlroy almost on a daily basis following their recent business partnership of TMRW Sports. He also can't wait to finally play on the same team as the four-time major champion, having only ever played against him at the Ryder Cup.

"Oh, the strategy is easy, I've got the No.1 player in the world on my team, so I'm going to be the biggest cheerleader he's ever seen," joked Woods ahead of The Match.

"In all seriousness, JT and Jordan have been on my teams in the past, with Ryder Cup and Presidents Cup, but I've never been with Rory. He has always been on the other side.

"So Rory and I, we have been close a number of years, especially this year given the golf ecosystem. We text, we call, conference call nearly every day for months at a time. We have been working through everything.

"The amount of respect I have for him, he's only 33 years old but he's an old soul. He's not only well read, but so articulate about life, he gets it, he gets the big picture, he gets what we want to create and he understands the past of the game, the history of the game, the players that came before us. He puts me in that category and I say 'dude, I'm not that old, I'm still one of your competitors'.

"Just to be able to work with him like this on a personal level each and every day, it's an absolute blast and now he's my partner."

Woods then spoke about how impressed he has been with McIlroy's ability to increase his ball speed in 2022.

He called him "an ass" for being able to play "chippy-cut drivers" that travel 183 mph.

"This year has been a joke," continued Woods.

"He has averaged 184.9 mph ball speed for the year. This is the fastest he's ever been and this is the oldest ever age he's been. He's figured something out.

"He went to a shorter driver. He's always got the club a little stuck behind him and swung out to the right a lot, now he can get on top of it and that's increased his swing speed.

"His nervous system is now firing. It's hard to describe that to people. If you're an Olympic weight lifting champion, doing snatches and cleans, anything like that, you burn your nervous system. There's certain things you would do, explosive one-two reps, and eventually you get to another level. Your nervous system gets used to firing at that speed. That's what he did with his golf swing.

Next Page: Tiger Woods tells Charlie Woods life message - "You will never be my friend"