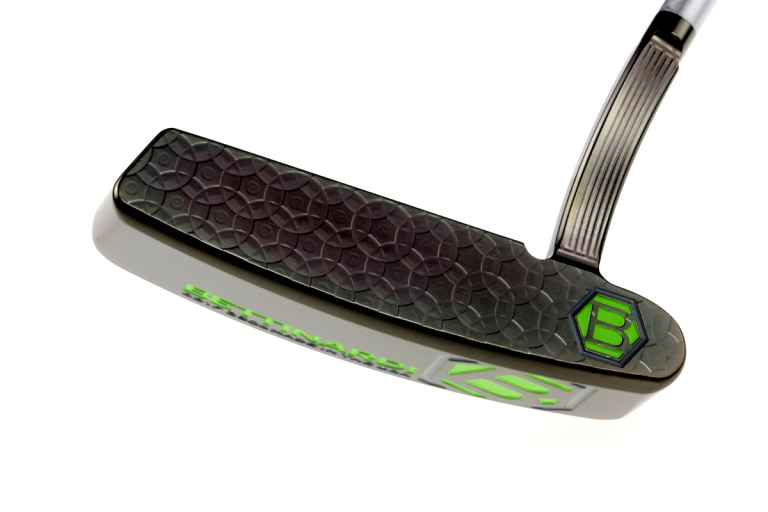 Over recent years Bettinardi has emerged as a big player in the putter market, and in the BB1F 2016 it has released its best product to date.

Modern, extravagant – absolutely stunning. The green grip, and green flashes on the putter head, make the putter stand out, and the brushed steel shaft, which looks like graphite, is also something out of the norm which took our fancy. The HoneyComb design on the face of the putter also adds some spice.

At first glance, it appears the flat stick has a simple black finish, but look closer and you will see all the colours of the rainbow, a colour Bettinardi is calling “Midnight Black”.

While the aesthetics may be out of left field, the square head shape is traditional, which we enjoyed looking down at. The ridge-milled shaft fades into the head, so as to minimize distractions.

It is a medium to firm feel off the face, providing lots of feedback. Those that prefer a soft feeling putter may find it too explosive, but we were enamoured it.

The Bettinardi BB1F 2016 is superbly balanced, promoting a smooth stroke through the hitting area.

The HoneyComb design got the ball rolling end-over-end straight off the bat, which allowed us to judge distances with ease.

Related Articles
Budget vs Premium Putter Test | £50 vs £400 | How different will they perform?
Bettinardi Putter Review | Studio Stock SS18 and Queen B 6

The simple alignment aid worked well, and we were holing lots of putts from 10 feet and in as it was so easy to line up, and keep square through impact.

This putter is suited to better players as there is not a massive amount of forgiveness on offer if you stray from the centre of the bat.