Callaway Big Bertha B21 Driver Review: Not quite a miracle cure for your slice

The “anti-slice” Callaway Big Bertha B21 driver could help some golfers to reduce their slice, but it can't work miracles. 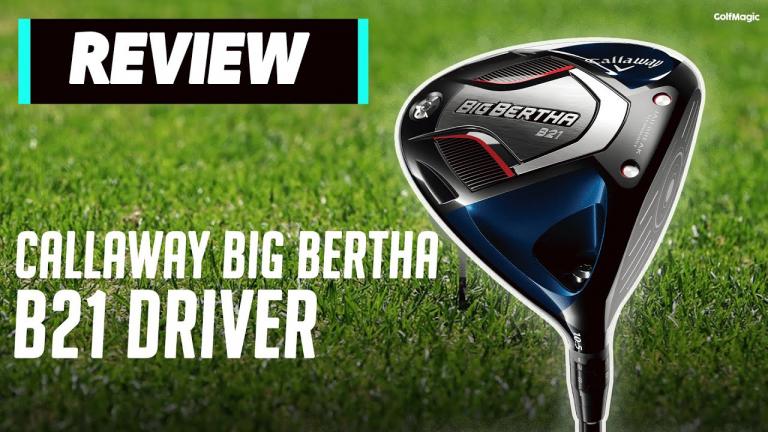 Fills you with confidence over the ball; feels good off the middle of the face; will definitely help those struggling with a slice
Spin rate was too high; slightly overpriced; the term 'anti-slice' is misleading
Our score:
Overall:
4
PRICE: £449.00 YEAR: from 2020
Callaway Big Bertha B21 driver - Key Features

The Callaway Big Bertha B21 driver is designed to help battle the sliced shot that so many amateur golfers struggle with, but how well does it really work?

While it can certainly help to reduce a slice, we wouldn't go as far as hailing it as a driver that can cure your slice. So while it's a good club it's been out for a long time now so check out some of the best golf drivers you can buy.

It’s not often I’d mention a headcover when talking about looks of a club, but this was definitely a standout accessory. For years now we’ve had headcovers go all over the place and be somewhat impractical with how you put them on and take them off, which made them a bit of a chore. With a classic colour scheme and a nice glossy finish, this one will definitely make your golf bag stand out.

Now, in terms of the look of the Big Bertha B21? I’m still a bit torn. The club has a LOT of glare, as you can see in the video. This has never been a problem in the past and to be honest I’m probably just being a bit picky here, but when it comes to personal preference, I’m not the biggest fan of this feature.

The club's shape itself is very similar to the previous Big Bertha range several years ago, but with a slightly blue tint and a red alignment line on the crown of the club, I can definitely see how this club gives a golfer confidence when setting up to the ball. The shape is slightly different to those classic drivers but that’s not a problem by any means. You can tell it is definitely a draw bias club when setting up to it.

The design of the club is very Big Bertha style, and we really like how they kept some of the traditional features in this modern club to keep the range fresh and relevant to the brand.

In terms of performance, the Big Bertha B21 was generally a really nice club to hit with a compact feel. Distance was pretty impressive, but nowhere near as long as the likes of the Callaway Mavrik driver or other top drivers such as the TaylorMade SIM and Cobra SPEEDZONE driver.

The big question, though, is whether or not this driver really is 'anti-slice', which in my opinion isn't quite true. It's a draw biased driver, something we have seen multiple times in the past across other brands and it certainly does help reduce a slice, but I wouldn't go as far to say it's anti-slice.

One other problem I found with this driver was spin rate. Callaway say that the B21 is a low-spinning driver, but I was averaging between 3000 and 4000 rpm, when ideally I want between 2000 and 3000, which means I wouldn't be able to put this driver in the bag. Now spin rates could be different for someone with a slower swing speed, but this was my personal experience with the B21.

Should you buy the Callaway Big Bertha B21 driver?

The Callaway Big Bertha B21 is a really nice driver to hit, and for the right target audience it could be a real weapon. If you're someone with a slower swing speed and you really struggle with a slice, then this driver is definitely worth trying, but with an RRP of £449, in my opinion it's a little overpriced when there are clubs that do a similar job for much cheaper.