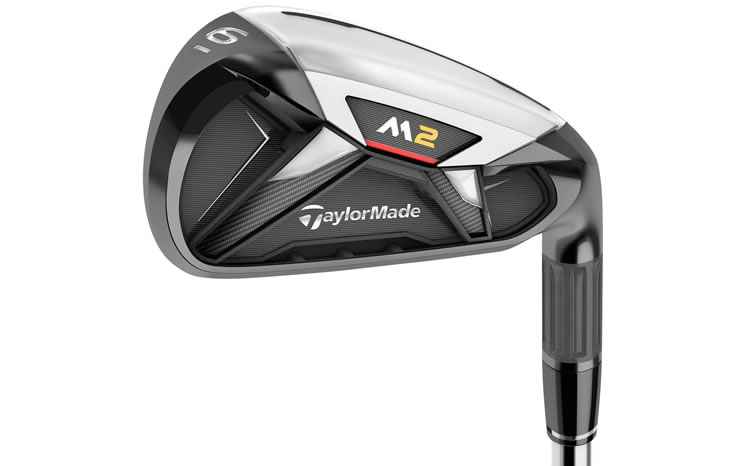 TaylorMade's longest and most forgiving iron ever

If you are looking for a new game improvement iron that generates distance and playability, look no further than the TaylorMade M2.

To position the centre of gravity low in the M2 iron, TaylorMade’s engineers have utilised a new fluted hosel design to remove discretionary mass from the hosel, redistributing it lower and further back in the clubhead.

The M2 iron also features an advanced topline construction, a 360-degree undercut that functions to increase the unsupported face area whilst saving weight to lower the centre of gravity (CG), creating a canvas that lends itself to high ball speeds, optimised launch angle and spin rates.

Speed and higher ball flights are achieved through the incorporation of a newly designed Speed Pocket and a thin face with Inverted Cone Technology.

First found in the RocketBladez irons in 2012, the Speed Pocket is one of TaylorMade’s most revolutionary technologies, engineered to increase launch angle and ball speed while providing added forgiveness for shots struck low on the face.

M2 irons employ a 3D badge to manage sound and feel, which features multi-material V-shaped struts to improve sound qualities and dampen unwanted vibrations. To accomplish this, the badge was designed to be extremely stiff without inhibiting ball speed.

There is a moderate topline to the M2 iron, which is not too thick or too thin, so we can see this appealing to a wide range of game-improvement players.

The back of the iron looks great in the bag, especially knowing there is plenty of technology packed into it with Inverted Cone Technology (protecting ball speed on mis-hits) and a revamped Speed Pocket (delivering more ball speed, launch and spin).

As with the case of the M2 fairway wood, the new fluted hosel, which saves weight up top, aids the sound and feel - as you can probably tell from our video review.

When you consider the M2 8-iron (33 degrees) delivered us with 165 yards of carry distance, without being thinned, it's clear there are distance gains to be obtained with the new TaylorMade iron.

We've not experienced this sort of distance from an 8-iron before, a club that is likened to our current 6-iron.

On the whole, the M2 irons proved easy to hit airborne consistently with their ultra low CG (17.2mm as opposed to 19.2mm on previous TaylorMade game improvement irons), while the sweetspot has been lengthened (9.7% larger unsupported face area than before) to ensure better ball striking.

Turf interaction felt great with both fairway and intermediate rough and there was consistent distance control and ball flight from each iron.

Like the rest of the M2 family, distance becomes of little issue.

The new M2 irons pack a punch in terms of yardage and ease of launch, and we also believe they will appeal to the eye of every game-improvement player out there.

Game-improvement irons are by no means cheap, but if you seek a set that is going to help you lower that handicap from the mid teens into the singles, then look no further than the M2.