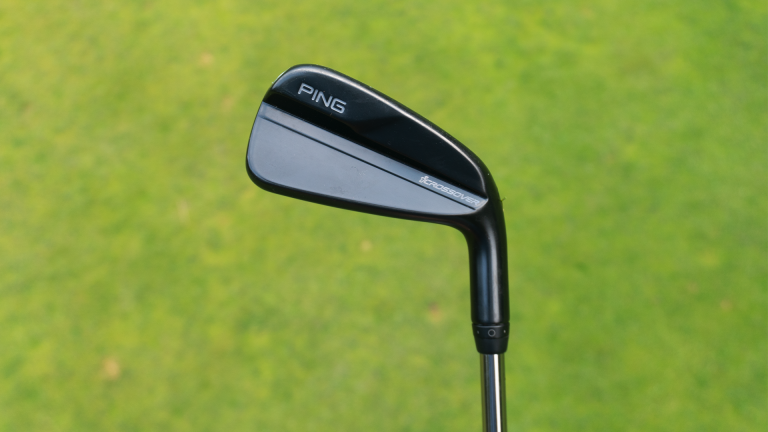 - The PING iCrossover Utility has a great feel and produces great distances and ball speeds. - This club is a good alternative to use if you prefer irons over woods.
- The Ping iCrossover Utility's adjustability feature isn't needed that often - £249.00 could be too expensive for some golfers.
Our score:
Overall:
5
PRICE: £249.00 YEAR: from 2022

On first glance, the PING iCrossover Utility looks like a formidable club. When you take it out on the golf course, it performs in formidable fashion.

The iCrossover is PING's latest driving iron and this type of club can help you approach par-5s in two shots or provide a bit of relief off the tee box when your driver isn't behaving.

Like some similar designs from previous years, the PING iCrossover can be adjusted in the loft and this can help you to hit lower or higher ball flights.

We would always encourage golfers to take a driving iron for a test run. As much as they sound appealing and the club face produces a soft feel out of the middle, they are tough clubs to strike well every time.

What is the PING iCrossover Utility all about?

The PING iCrossover has moved away from its predecessor, the PING G Crossover, and now resembles a design similar to the PING i230 irons.

In comparison to the old G Crossover, the new iCrossover has less sole width. It has tungsten weighting placed in the heel and the toe.

This driving iron is also adjustable which is a unique feature when compared to other clubs of this kind. The PING iCrossover has 1/1.5 degree of adjustability and this also changes the lie angle.

Cobra and TaylorMade have also produced driving irons with adjustability in previous seasons, but with the sleek design too, this PING iCrossover really catches the eye and impresses.

Which golfer does the PING iCrossover Utility suit?

As driving irons such as the PING iCrossover have thin faces and low lofts, you need to have a medium to fast swing speed in order to attack the ball and get the best out of this club.

Also, this club will suit players who aren't confident with a 3-wood or 5-wood in their hands and who would much rather use irons off the tee or with long approaches into par-4s and par-5s.

In terms of adjustability, this feature is mainly suited to lower handicappers who like to tweak the specifics of their clubs and focus on minute details to get the best out of their game.

As much as the feel of the PING iCrossover is good, this club shouldn't be advised for high handicappers or golfers who in their early careers need to focus on establishing solid connections with their standard irons.

The PING iCrossover that we tested was a 2-iron of 18 degrees. When we tested this club in the studio at Silvermere Golf Club, we were pleased with the distance, ball speed and spin consistency.
Out on the course at Mannings Heath Golf and Wine Estate, Alex was thoroughly impressed with the distances he achieved. Off the tee, he hit shots over 270 yards which makes this a suitable club to use when your confidence is low with your driver.

When we adjusted the lie angle to 1.5 degrees lower, we found lower apexes by about 20 feet and shorter distances. This was expected, however, we were still impressed by the performance and dispersion.

Alex managed to carry some shots at least 250 yards when the loft was lower, which he points out, would be ideal for summer conditions when golf balls are running on firm and fast fairways.

When we took the loft 1.5 degrees higher than neutral, the launch angle increased by two degrees with some shots and unsurprisingly, the apexes were far higher too.

We also noticed that the spin rate reached as high as 4500 rpm, which is a little too high. This could make you think twice about adjusting your new iCrossover more than a degree above neutral.

This club looks fantastic. It is completely black which can limit colour durability in some cases. Nonetheless, PING has produced a very striking and professional design.

In the address position, the club face and the grooves are distinctly grey and surrounded by the striking black colour. This design helps instil confidence because PING has made it very clear where the middle of the club is.

The feel of the PING iCrossover is very pleasing. It is hard to connect perfectly with every shot from a driving iron, but the iCrossover makes a very satisfying connection out of the middle and this was a significant quality that we noticed.

When purchasing the PING iCrossover, one element you must factor in is adjustability. If this is the sole reason for buying the club, we would suggest you test this part first.

We believe a large portion of this club's value is focused on adjustability, but Alex didn't need to use the adjustability tool that much during rounds as the neutral setting performed well enough.

Nonetheless, the iCrossover has a great look and it is a very striking club that looks great in your golf bag. It produced solid launch angles, distances and ball speeds in our testing and if you are confident in your ability to hit such a thin-headed club, by all means, buy it.