Ryder Cup officials are reportedly meeting with European captain Henrik Stenson today to try and persuade him not to join LIV Golf. 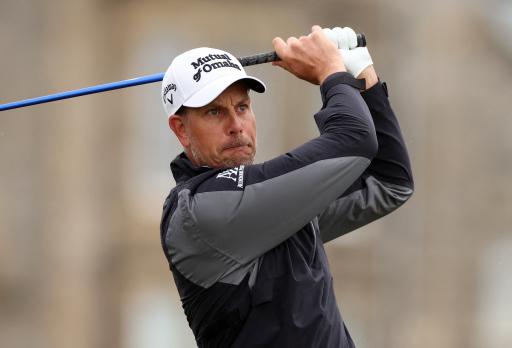 Ryder Cup officials will reportedly meet with Henrik Stenson today in an attempt to try and persuade the Swede not to join LIV Golf, according to The Telegraph.

Per the report by Jamie Corrigan, it states that Stenson's deal with the Saudi-funded series is all but confirmed. The 46-year-old's fee is said to be in the region of $30m, similar to that of other Ryder Cup Europe icons Ian Poulter, Lee Westwood, Graeme McDowell, Paul Casey, Sergio Garcia and Martin Kaymer.

LIV Golf are reportedly going to announce the signing of the 2016 Open champion in the coming days. They are also apparently targeting Cameron Smith.

Smith, 28, captured the 150th Open Championship at St Andrews last week and immediately after was involved in an awkward exchange over the topic of LIV Golf.

The Australian refused to rule out a move to LIV Golf, stating that he lets his team worry about that and he just concentrates on winning golf tournaments.

Hideki Matsuyama, Tommy Fleetwood, Tony Finau and Patrick Cantlay are the latest names to be linked with the rival circuit.

Although Fleetwood's wife and manager Clare reportedly told The Times after last week's major that the Englishman is going nowhere.

Such a move by Stenson to LIV Golf would cause considerable embarrassment for Ryder Cup Europe, as reportedly they had given him an ultimatum before his selection: LIV Golf or lead Team Europe in Rome 2023.

If Stenson were to jump ship, he would reportedly be stripped of the captaincy immediately. Bunkered have reported Thomas Bjorn would be lined up for a return to the helm.

Former World No.1 Luke Donald is also in the pecking order.

If the rumours are true and Henrik Stenson joins LIV Golf and gets axed as European Ryder Cup captain, who should take the reigns for 2023 in Rome?

More: The betting odds of players to join LIV by 2023

If Stenson were to join, then he would make his LIV Golf debut at the third event of the inaugural eight-event, $255m series in New Jersey at Trump Bedminster next week.

The Swede, who played The Open at St Andrews, missed the cut after posting 1-over par after 36 holes at the home of golf.

GolfMagic attempted to speak to Stenson about these rumours but he offered a "no comment" to reporters.

If he were to sign for LIV, it would surely be the most controversial signing to date, given what he has previously said about the role.

Stenson said: "I am fully committed to the captaincy and to Ryder Cup Europe and the job at hand.

"The captain does sign a contract... so I'm fully committed to my role as a captain and working hard towards the result we want in Rome."

GolfMagic has also learned that Rory McIlroy was in Sunningdale, Berkshire, not too far from Ryder Cup Europe HQ at Wentworth, yesterday after his 150th Open Championship heartbreak.

The timing could be coincidental, but perhaps the Northern Irishman might be involved in the meeting with Stenson somehow.

The Telegraph report that the Ryder Cup captain can earn as much as $4.8million through endorsements, though that is obviously a considerable difference to the alleged offer on the table.

Stenson has also reportedly suffered financial issues in the past, losing millions in the Allen Stanford fraud as well as other "failed business dealings."

Next page: Rory's tears after Open heartbreak at The Open